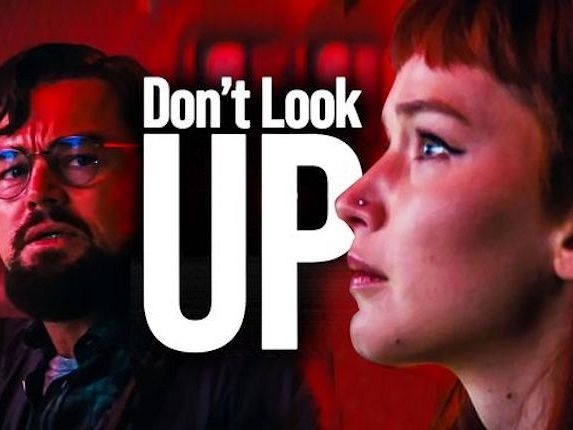 IA columnist Andrew P Street takes a look at the funny, sad, terrifying parable for our times that is ‘Don’t Look Up‘.

DON’T LOOK UP, Adam McKay’s star-studded Netflix satire about scientists desperately (and unsuccessfully) attempting to warn a jaded and deeply compromised world about the imminent arrival of an extinction-level comet, has already garnered a veritable encyclopedia of hot takes. But as best as I can see, none has so far specifically been about what is the most depressing thing about what is a deeply depressing film.

(Also: spoilers are coming, obviously, heaps of them. Don’t look down.)

That’s despite the fact that there are many, many depressing things about Don’t Look Up, starting with its entire premise. But the most depressing aspect, for my money, isn’t that it concludes with the utter destruction of human civilisation and the deaths of billions of human beings.

Nor is it the way that everyone, from Leonardo di Caprio’s newly-famous scientist Dr Randall Mindy to the MAGA-like “Don’t Look Up” crowd, realise too late that they’ve been manipulated to literal death by the media and powerful political and economic interests. Or even smaller moments, like when Kate Dibiaski (Jennifer Lawrence) accepts a marriage proposal knowing that it won’t matter in the slightest because they’re all about to die.

Or the way that Mindy sadly smiles as he delivers the film’s most sock-to-the-gut line, sitting around the table with his family and friends as the first booms of the early impactors hit in the distance:

“We really did have everything, didn’t we? I mean, when you think about it.”

Those aren’t the things that froze me to the spot when I was thinking about it a day later. What did it for me was Ariana Grande.

She plays Riley Bina, a Grande-adjacent popstar whose relationship dramas with her boyfriend-turned-ex-turned-fiance DJ Chello (played by Kid Cudi) is a national obsession, its saturation media coverage easily overwhelming early talk about that whole comet thing during the first act of the movie.

That’s not the most depressing aspect, though, and neither is the portrayal of the news media as being driven entirely by clicks, with eyeballs and shares the entire metric of what constitutes journalism, depressing though that definitely is.

(Parenthetically, I think that might be part of the reason why reviewers have been so scathing about the film — when we’re portrayed in movies, we journalists definitely prefer to be shown as brave iconoclasts speaking truth to power rather than algorithm chasers trying desperately to keep our increasingly fragile jobs. But even that isn’t the most depressing thing. I’m getting to it, honest.)

Late in the film, Bina becomes a wholehearted supporter of the “Just Look Up” movement and performs a song of the same title at a massive awareness-raising live event. There are thousands upon thousands of people there – presumably all on board with demanding that authorities save them from imminent death – and the song itself is one of the highlights of the film: not simply because it’s a perfectly decent number, but also because it does comedic escalation exceptionally well.

While starting with waffly positive sentiments and looking like a high-budget Eurovision entry, ‘Just Look Up’ grows more strident and direct as it goes on, finishing with Bina belting out the following verse:

Look up, what he’s really trying to say
Is get your head out of your ass

Listen to the goddamn qualified scientists
We really fucked it up, fucked it up this time

It’s so close, I can feel the heat big time
And you can act like everything is alright

But this is probably happening in real time
Celebrate or cry or pray, whatever it takes

And it’s funny and it’s clever, and days later Bina and Chello presumably die in the same conflagration as all those passionate audience members because writing and performing a song and even organising a massive event around it, which is the most impactful thing that a pop star can do, ultimately changes absolutely nothing.

And that’s clearly a deliberate allegory for the film itself.

With Don’t Look Up we have a bunch of talented, committed, passionate people clearly trying to make a difference. There’s a hugely successful writer and director in McKay. There are global superstars like Lawrence, di Caprio, Grande and Meryl goddamn Streep! They’re all doing the most impactful thing that they can do, which is creating a piece of art to get a message across in the face of a massive global emergency: in this case, the global non-effort being made about the very real climate crisis.

And yet, as Bina’s song shows, even they are aware that their effort and talent is almost certainly futile. It doesn’t matter how powerful a song you write — or film you create — to send a message of awareness. And that’s because the things that stand in the way of action about climate change are connected with power – both political and economic – where leaders and institutions are immune to attacks from pop music and Netflix. Whether Riley Bina is singing a power ballad or Adam McKay is making a movie, the catastrophe is still coming, its pace entirely unslowed.

And that, friends, is the most depressing thing about Don’t Look Up: that even it knows how little it can actually hope to do.

That hit especially hard for me. As a writer and journalist, I’ve long wanted to believe in the power of words to influence and effect change, even while suspecting that all the thoughtfully constructed columns in the world will do far, far less to save the planet than ten minutes with a crowbar in the control room of a coal-fired power station.

Here’s hoping I’m wrong. Or, alternatively, that it will inspire a generation to finally pick up some crowbars.

Andrew P Street is an Adelaide-based, Sydney-built journalist, author, editor and broadcaster and an Independent Australia columnist. You can follow Andrew on Twitter @AndrewPStreet and support him on Patreon here.