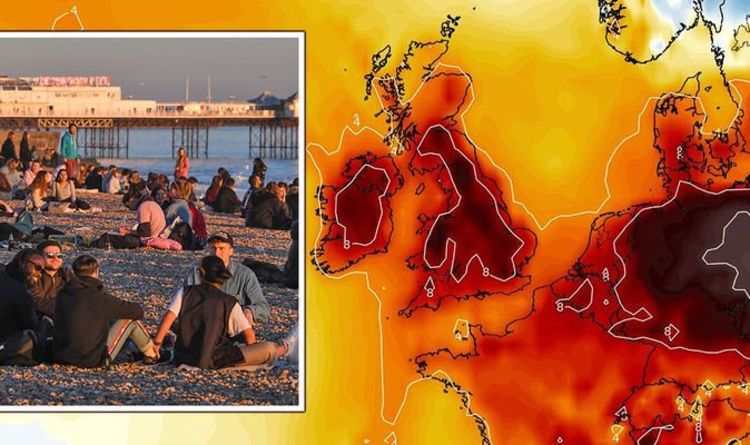 Such are the unusually high temperatures across the country, the Met Office reported some areas will see some “sunny spells” to finish the year. According to forecasters, London could see a high of 15C (59F), which exceeds the 14C expected in Athens. Due to the warm band of weather arriving in the country, temperatures will match or exceed areas such as Nice, Rome, and Madrid.

With many areas exceeding double-digit temperatures, the Met Office has warned the UK may experience the hottest New Year’s Eve on record.

Met Office forecaster, Craig Snell said: “It will be 14-15C across the south and could potentially be the warmest New Year’s Eve on record for the UK.”

Met Office senior operational meteorologist Marco Petagna also tweeted: “As we enter the final day of 2021 it’s set to be a record-breaker.

The best of the conditions will be towards the south of England, the Midlands and East Anglia later today.

While Newcastle will experience a high of 13C (55F), Norwich, Southampton and Plymouth will see the mercury rise to 14C (57F).

As the country prepares to welcome in the New Year, Mr Snell revealed any lingering rain in parts of the country will begin to wash away in the early evening.

For many areas of the country, the mercury will range between 10-13C as the UK begins 2022.

While the north of England will experience some rain, these showers will be confined to parts of the North-East.

Progressing through to the afternoon, Mr Snell concluded most of the UK will experience skies as the country kicks off the new year with incredibly mild temperatures.

After this spell of warm weather, the Met Office has warned temperatures will drop sharply in January.

In its long-range forecast between Jan 4-13, it states: “Temperatures are expected to fall to around or slightly below average early next week with overnight frost becoming more widespread for a time.

“Some wintry showers with snow to fairly low levels is possible in the north with cloud and rain clearing to drier and brighter conditions further south.

“This regime is likely to be short-lived though as a return to a milder, unsettled pattern.