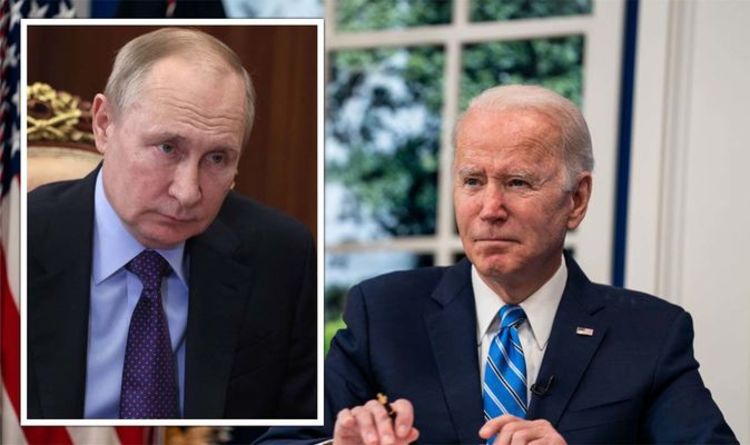 In a strongly-worded statement from the White House, the US President appeared to up the ante by offering his Ukrainian allies additional support as they teeter on the brink of war with their former Soviet Union ally. His warning comes as at least 100,000 Russian troops sit on the European country’s eastern border.

International observers, including the US, EU and UK, believe that the Russian President is preparing for an invasion amid fears that an increasingly Western-looking Ukraine could join Nato.

Russia has responded by blaming the West for the increasingly sour relations – saying their meddling is inflaming the situation.

It reportedly wants reassurances that the country will not be allowed to join the US-dominated military alliance.

In a statement released this evening, Mr Biden told Ukraine’s President Volodymyr Zelenskiy that America and its allies will “respond decisively” if Russia further invades Ukraine.

“He made clear that the United States and its allies and partners will respond decisively if Russia further invades Ukraine.”

A senior administration official added that Mr Biden had laid out “two paths” for Mr Putin.

One involved diplomacy and de-escalation, while the other was based on deterrence “including serious costs and consequences” such as economic sanctions, strengthening Nato’s force posture and military assistance to Ukraine, they explained.

Yuri Ushakov, Putin’s foreign policy adviser, said: “Our president immediately responded that if the west decides in this or other circumstances to impose these unprecedented sanctions which have been mentioned then that could lead to a complete breakdown in ties between our countries and cause the most serious damage to relations between Russia and the west.

“Our president also mentioned that it would be a mistake that our descendants would see as a huge error.”