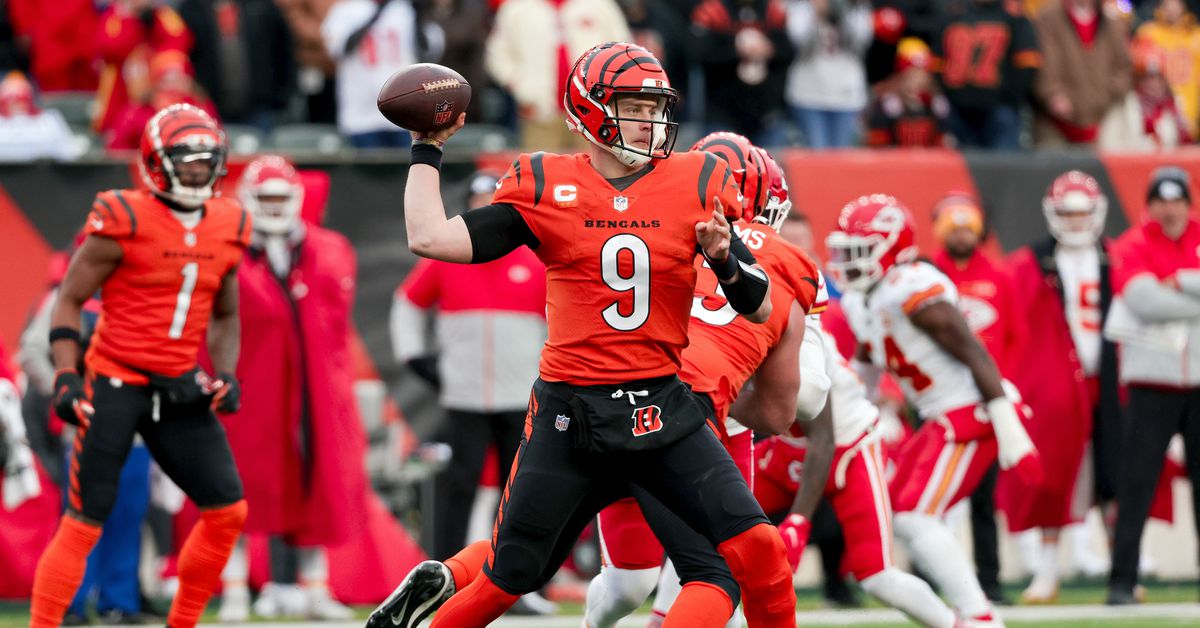 I don’t know if the Bengals have the experience and maturity to make a deep run in the playoffs in 2022, but I don’t know if that really matters. Of course, an early exit would be disappointing — but we’re witnessing something far bigger brewing in Cincinnati that could shape the trajectory of the league for years to come. The win over the Chiefs on Sunday simply showed the potential and promise that’s being unearthed.

Sure, that sounds like hyperbole, but sometimes it’s important to take a step back and realized what this organization has achieved in a short period of time. In two years the Bengals have gone from 2-14 cellar dwellers desperate to find some footing, to 10-6 AFC North leaders with everything clicking.

There are so many pieces operating together that made this all happen, but it really it begins with Taylor having what so few young coaches lack: Patience. Taking over a 6-10 team in 2019, Taylor began his time in Cincinnati with the No. 11 pick. Out of a position where he could take the impact skill position player coaches crave, the Bengals made an impact. Instead of pushing for a trade, or trying to fit a square peg in a round hole, Taylor and Co. sat and took Jonah Williams with the extremely un-sexy first round pick that’s been critical to everything that’s happening now.

It’s important to go back to this pick because it really explains the ethos of the Bengals’ front office during this period. They haven’t sold out to push the rebuilding process. It’s been handled slowly, methodically, and without much pomp and circumstance. Naturally this is pushed forward when you have the No. 1 pick in the draft, as Cincinnati did in 2020 — but even so, it felt like Cincinnati believed in Joe Burrow more than lot of people. We can try to retcon this all we want, but there was an overwhelming feeling that Burrow was No. 1 by default, a Heisman winner by default, landing him back in his hometown … by default.

We’ve seen this scenario before, and it normally nets you a good player, but not someone who can change a franchise. We can now say that Joe Burrow is a franchise quarterback, the face of the Bengals, and quickly becoming one of the best passers in the entire league. It was apparent last year before he was injured, now it’s completely cemented.

With one game left to play we have a full 16 game regular season slate to look at for 2021-22, similar to any other year. The result has been remarkable.

All this while averaging over 8.8 yards per attempt, and consider that maintaining a 7.0 is largely considered to the be the mark of a top-tier QB. Burrow isn’t just setting the tone for young QBs in the NFL, he’s destroying every expectation.

Of course, there’s so much more to a passing offense than just the dude throwing the ball — so enter Ja’Marr Chase, and Tee Higgins as his primary weapons. Two 1,000 yard wide receivers, aged 21 and 22 respectively. It’s a nucleus that should be able to stay together for a long time. Oh, and remember Jonah Williams, the offensive tackle Zac Taylor took his first year? Yeah, he’s one of the best pass-blocking tackles in the NFL now.

I could keep gushing about how amazingly this team was constructed, but instead let’s focus on what they need to fix moving forward. Cincinnati’s secondary really needs work and a significant talent upgrade, and while the front seven is good at stopping the run overall, they’re poor at stopping teams from getting first downs on the ground, or preventing big runs.

The best part of all this if you’re a Bengals fan: These are such small gripes! In the grand scheme of things this isn’t much to fix, and Cincinnati has $58M in cap space next season, with their entire nucleus locked up and not many critical players set to hit free agency. This means that a playoff team with elite talent now sits in the seat where they can splash a little on talent without selling out their overall vision of a slow build around its tentpoles.

Based on how we’ve seen this team get built over the past few years they won’t rush this and do something dumb. It might not result in immediate playoff success, but no team in the NFL is better poised for the future than the Cincinnati Bengals.

There’s really two parts to all this. The obvious is that Antonio Brown is a loser in the absolute definition of the word. We don’t fully understand the reason why he walked off the field and quit on Sunday. It’s been speculated there was in-fighting over Brown’s snaps, and he felt the team was trying to stop him getting incentive bonuses. The truth will likely come out in time, but it’s the most recent in a long pattern of behavior that has seen the league’s most talented receiver destroy himself and hurt others at every turn.

The Buccaneers aren’t without blame for all this too. No part of their roster required signing Brown, yet they got so greedy with their talent hoarding they put team chemistry at risk. Their belief was that Bruce Arians and Tom Brady could create such an infallible aura nobody would step out of line. Trust Antonio Brown to break that.

It’s all a mess. The Buccaneers will be fine, because he’s just an average receiver at this point — but Brown’s career will probably be done. Showing his whole ass on national TV while heading out the door seems fitting. Good riddance.

Not holding my breath on this one, but losing on Sunday Night Football could all be worth it if this means Mike Zimmer moves on Minnesota gets a new coach.

I think Zimmer is a fine coach, really I do, but he’s no longer effective. His in-game management and anxiety about keeping his job is permeating games and showing in his style for the last couple of seasons. It’s time for these sides to move on,

Kicking a cat when they’re down feels wrong, but when you get 50 points hung on your it’s just really bad.

It is what it is. The Jaguars need to find a way to turn this around with a new coach before their completely ruin Trevor Lawrence. Lawrence is regressing in a major way, and it’s all a mess.

Okay, so technically yes, they can make it — but this team feels done. Not that anyone expected them to beat the Rams with Tyler Huntley at QB, but it’s just a shame the season feels like it’s over because like this.

I love the turnaround the Eagles have made this season. I can’t pretend to really understand how it happened, but it’s here. Jalen Hurts hasn’t been playing stellar football this season, but the rest of the team has propped him up and found ways to win.

Sunday’s victory over Washington was the their 7th in the last two months, going 7-2 in the stretch and earning this brilliant run.

What began feeling like a overwrought attempt to handcuff Chase to Joe Burrow has paid incredible dividends and formed one of the best partnerships in the NFL. It’s remarkable that it occurred, and we’re so lucky to get to see this moving forward.