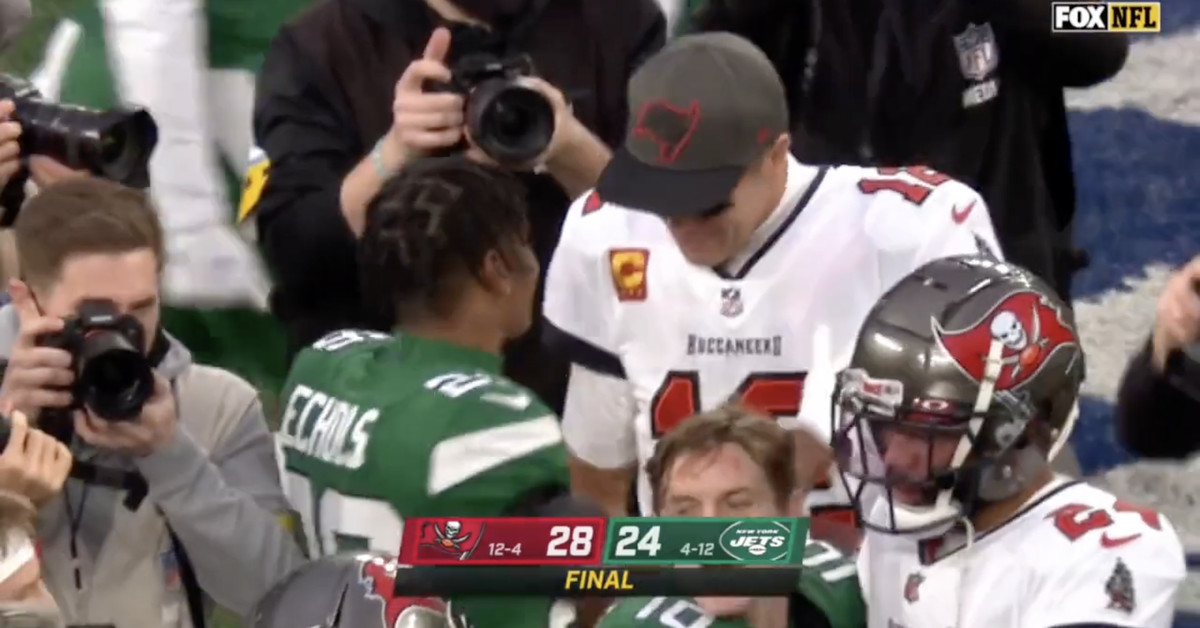 Tom Brady memorabilia doesn’t come easily — or cheaply. As the Tampa Bay Buccaneers’ 44-year-old quarterback nears the end of his legendary career, it seems like everyone is trying get a piece of Brady before he eventually retires.

A strange scene played out earlier this year when Bucs receiver Mike Evans caught Brady’s 600th career touchdown pass and then handed the ball to a fan in the stands. A Bucs official asked the fan for the ball minutes later, and compensated him with various gifts from the team. The incident sparked a debate over whether or not the fan should have given it back as estimates came in that the ball could have fetched half a million dollars at an auction.

In Week 17, New York Jets rookie defensive back Brandin Echols intercepted Brady just before halftime. After the game, Echols sought out Brady to have him autograph the ball despite the fact that Brady led the Bucs to a come-from-behind victory in the final seconds.

Echols made a great play to pick off Brady, and it directly led to points when the Jets added a field goal to their lead just before the half. The fact that he intercepted arguably the greatest QB to ever live made the moment extra special to Echols.

On one hand, you have to respect Echols — a former sixth round draft pick — for walking away with a signed, game-used ball on what might be the biggest moment of his career. On the other hand, asking the opposing QB to give you an autograph after he just beat you is a little much.

The Bucs were trailing most of the game until Brady played the hero on the final drive once again. He led Tampa Bay on a nine-play, 93-yard drive capped by a 33-yard game-winning touchdown toss to Cyril Grayson. The Bucs won, 28-24.

Echols may never get another chance to intercept Brady, or ask for his autograph. He made the most of his opportunity in more ways than one.