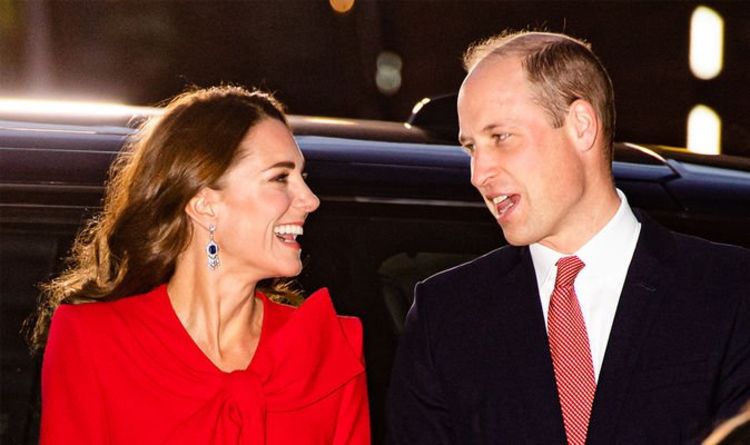 The Duke and Duchess of Cambridge sent out a card with a special snap of them with their three children: Prince George, eight, Princess Charlotte, six, and Prince Louis, three. The picture was taken while the family were on holiday in Jordan in October. Ms Forsey was quick to point out that the picture was a far cry from traditional, staid royal pictures.

Instead, it was a dynamic and “personal” photograph, where the family were openly affectionate towards one another.

Kate and William had their hands on each other’s knees, while the Duchess also had her arm around her eldest child, George.

Ms Forsey said of the photograph on the podcast: “As their Christmas photos most years do, you could see it was a real family, personal photo.

“They weren’t standing formally next to each other, Kate and William have their hands on each other’s knees, Kate had her arm around George.

In the photograph, William is sitting on what Mr Myers described as an “utterly bizarre golden ball” and is wearing a khaki top and beige shorts.

Kate is wearing a matching khaki dress and the couple have their feet on a fluffy rug.

Prince William, Kate and their children in December 2020 (Image: GETTY)

George and Charlotte are sitting on “traditional” chairs, George wearing a camouflage top similar to the one he was wearing in his birthday portraits last year, and Charlotte wearing a cute blue and white dress.

The dress, which is £26 from Mango, is another example of the Duchess of Cambridge shopping for her children on the high street.

The youngest, Louis, is sitting cross-legged on the floor, wearing a blue shirt that looks very similar to one George wore a few years back, and wearing navy plimsolls that also could be hand-me-downs.

The picture is believed to have been taken in Petra, Jordan, where the family visited on their holidays.

Jordan is a very special place for Kate, because she actually lived there when she was a young girl.

The Middleton family moved there in 1984 due to Kate’s father Michael’s job with British Airways.

In 2018, William visited the country and was shown a photograph of the Middletons at the exact spot he was standing.

While Kate was just two to four years old when she lived there, as they moved back to the UK in 1986, she is said to have “fond memories” of their time in Jordan.

Princess Diana and Kate Middleton: A look at their piano playing

The festive period has been quieter for the royals than usual.

Instead of the traditional Christmas at Sandringham with the extended family, the Queen cancelled those plans and opted to stay at Windsor Castle.

She paid tribute to her late husband Prince Philip in her 3pm Christmas Day broadcast, while other senior royals sent out best wishes via their social media channels.

With coronavirus cases spiking, it is likely the royals won’t be doing as many in-person engagements, as usual, this January, especially more elderly members like the Queen herself.

However, there is much to look forward to this year with Her Majesty’s Platinum Jubilee.

On February 6, she will have been on the throne for 70 years and the country will come together to celebrate with a four-day bank holiday in June.

To subscribe to Pod Save the Queen go to your normal podcast provider.