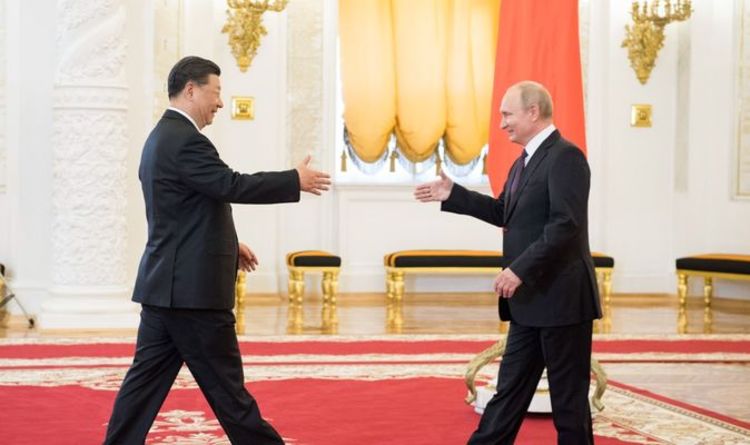 The agreement would double exports to China, transporting up to fifty billion cubic metres more natural gas every year via a major new planned pipeline – Power of Siberia 2. This comes as the rest of Europe reels from a major energy crisis, with prices climbing to a new record last week, up almost 800 percent since the start of the year. The EU’s energy crisis has intensified in the past weeks after nuclear reactors were halted in France, with Germany recording low wind power output.

The resultant power shortage has prompted countries to burn more coal and even oil to keep the lights on and homes warm, flying in the face of the COP26 commitment to phase out fossil fuels.

Experts have accused Mr Putin of tinkering with gas supplies in order to pressure the European Union into approving the Nord Stream 2 pipeline.

The new pipeline will see gas transited from Russia into Germany, bypassing Poland and Ukraine. But after getting hit with delays, certification remains suspended.

Analysts warn that this new pipeline would give Russia further leverage over Europe, which would leave the bloc powerless to stop the Kremlin’s growing aggression towards Ukraine.

Danil Buchkov, an expert on Russia and China relations, said: “Power of Siberia 2 will supply gas from Siberia’s Yamal Peninsula, source of gas exported to Europe.

“Western officials worry project could have geopolitical implications for European nations before they embark in earnest on transition to renewables.

“The planned Power of Siberia 2 pipeline will be able to pump into China around the same amount that Nord Stream 2 would be able to transport to Europe, giving the Kremlin more options about who gets the gas and at what price.”

Brandon Weichert, a geopolitical analyst, told Express.co.uk that Europe’s dependence on Russian gas will mean they will eventually have to cave to Moscow’s pressure.