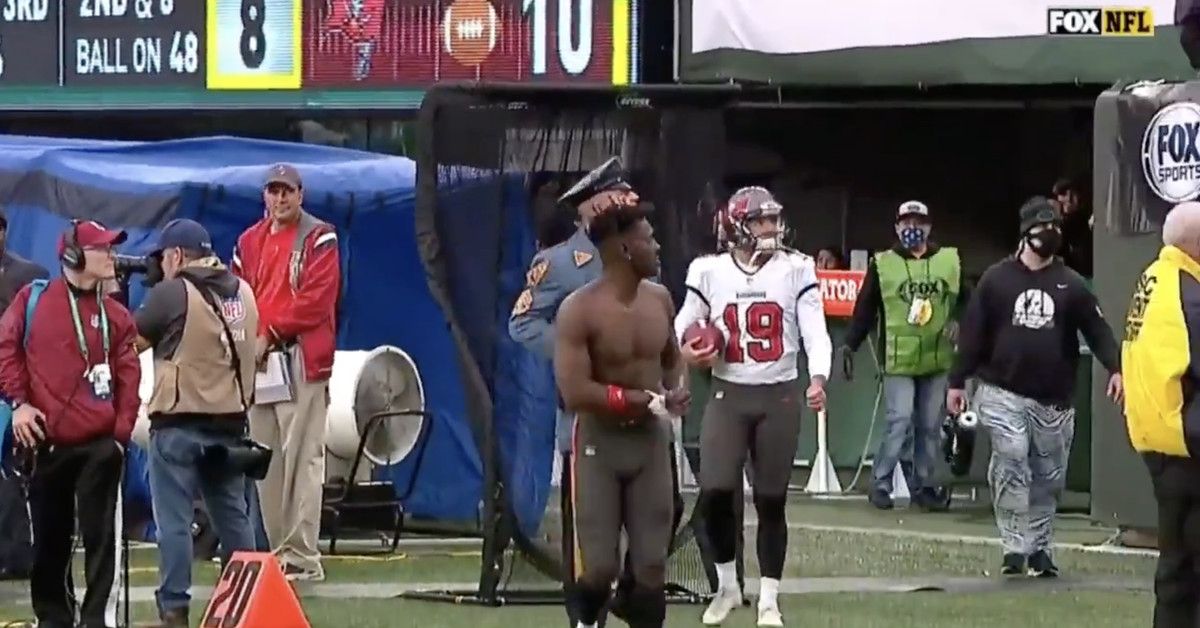 Antonio Brown took off his uniform on the sidelines and stormed out of MetLife Stadium before the Tampa Bay Buccaneers’ come-from-behind win over the New York Jets in Week 17. The team announced Brown is no longer a member of the Bucs after an outburst that became the talk of the league on Sunday.

With the Bucs trailing the Jets in the third quarter, Brown took off his helmet, jersey, and shoulder pads, and threw his undershirt and gloves into the crowd, following an apparent argument with head coach Bruce Arians. Brown dramatically left the field with the game still going on despite teammate Mike Evans trying to calm him down.

Arians reportedly asked Brown to enter the game, and he refused multiple times. Brown reportedly did not believe he was healthy enough to play. Watch the scene here:

There were reports that Brown was benched during the game, but a source (from the team’s side?) denied it to ESPN.

Here are a couple alternate angles of Brown’s meltdown from the stands. He was jumping up and down and attempting to pump up the crowd as he ran into the tunnel.

Antonio Brown just took jersey and gear off and threw it into crowd. Celebrating and ran to the locker room. No idea what is going on. pic.twitter.com/uPALqGJGJo

The veteran wide receiver was listed as questionable entering the week because of an ankle injury. He couldn’t practice Thursday or Friday but was cleared by the team to play. He had three catches for 26 yards before leaving the game.

NFL insider Ian Rapoport reported Brown didn’t think he was healthy enough to play. Brown told the staff he wasn’t going into the game because in his mind he didn’t feel he was healthy. Bucs coaches then threw him off the sidelines and cut him from the team.

Brown had a $1 million contract incentive within his reach. The situation is reminiscent of Kawhi Leonard’s breakup with the San Antonio Spurs, which also happened because the Spurs were trying to force Leonard to play when he didn’t feel he was healthy enough to do it.

Arians wouldn’t answer questions about Brown after the game, but did note that he’s no longer part of the team.

Here’s the video of Bruce Arians making the Antonio Brown news official: “He is no longer a Buc. That’s the end of the story. Let’s talk about the guys who went out there and won the game.”pic.twitter.com/fVBlytElt0

Tom Brady showed empathy to Brown when asked about the situation after the game. “We all love him,” Brady said. “We care about him deeply. We have a lot of friendships that will last. I think everyone should be very compassionate and empathetic to some very difficult things that are happening.”

Brown did not travel home with the team. He reportedly caught an Uber out of the stadium.

Brown’s driver posted this on social media upon picking him up:

Brady led the Bucs on a nine-play, 93-yard drive to win the game, capped by a 33-yard touchdown throw to Cyril Grayson with 15 seconds left. The Bucs improved to 12-4 with the win.

Brown was suspended for three games for allegedly lying about his vaccination status before returning in Week 16. He caught 10 passes for 101 yards in the win against the Panthers.

Brown thanked the Bucs for the opportunity after the game. Then he released a rap song under the name AB.

A Tampa Bay passing game that recently lost Chris Godwin to a torn ACL is down one its top targets. At 33 years old, this could be the end of Brown’s NFL career.