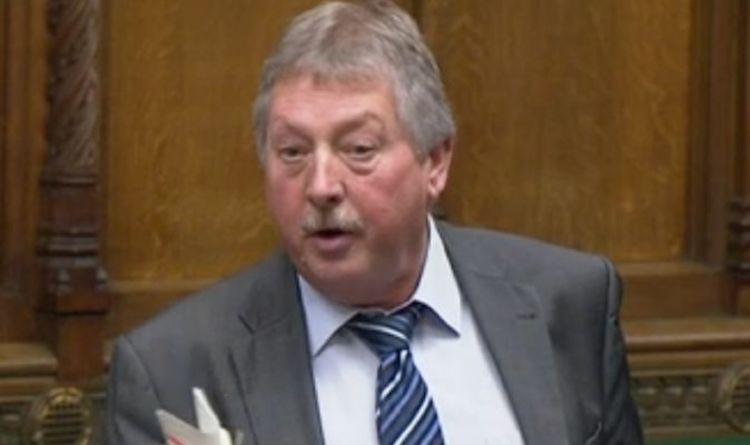 The DUP’s Sammy Wilson erupted on the floor of the House of Commons on Wednesday as he gave a passionate speech accusing the Government of sparking misery for millions of Brits who have been whacked with soaring energy prices coupled with VAT on their gas and energy bills, as well as the looming cost of green levies on the average consumer.

Speaking directly to Prime Minister Boris Johnson, Mr Wilson said energy opportunities available to Britain after Brexit, including cutting VAT on energy bills, are simply not being taken advantage of.

He also used the example of woodchip still being imported from the USA, despite wood chip and alternative fuel options being available in the UK, as further evidence Brexit energy opportunities are not being snapped up and green levies are pounding UK consumer wallets.

He said: “Millions across the United Kingdom are facing great difficulty with their energy bills.

“30 percent of those bills are actually driven by the Government in the form of VAT various green levies!”

JUST IN ‘Take that back!’ Boris explodes as ‘disrespectful’ Blackford told ‘calm down’

The East Antrim MP went on to demand that a review of VAT on energy bills must be brought as part of “our Brexit freedoms”.

He questioned why Britain has not explored removing the deeply unpopular tax now the UK has removed the shackles from the EU, a move Mr Johnson himself demanded in an article he wrote for The Sun in 2016.

Mr Wilson added: “And given that some of the green levies are spent on mad-cap ideas such as subsidising Drax Power Station [in North Yorkshire] to the tune of £1billion a year to bring wood chips from America when there is fuel down the road.

“Can we have a review of the Green Levy as well so that people are not forced with the burden of unsustainable fuel bills!”

Mr Johnson did not answer the demands directly, instead he defended the Government’s position stressing how the energy price cap is still in place.

He added how the Government are also carrying out “all the mitigations” to ease the burden of energy prices off Britons.

The Prime Minister also said the Government “are determined to help people through this pandemic” amid soaring energy prices.

He said: “What we must do above all is make sure this country has a better supply of cheap and affordable energy.”

Speaking at a press conference on Tuesday, Mr Johnson said scrapping VAT on energy bills would be a “blunt instrument” as it would lead to those that do not need energy bill support seeing the cost of their bill cut.

Asked by The Sun’s political editor Harry Cole whether he “misled” voters in the 2016 article penned in The Sun about scrapping the VAT energy tax after Brexit, Mr Johnson said he did not mislead voters, but he suggested the EU would never scrap the policy themselves anyway.

He added that he “appreciated the difficulties” that Brits are facing amid soaring energy gas prices but emphasised Government schemes such as the Warm Home Discount and Winter fuel payments would alleviate pressure on those struggling this winter.

Mr Johnson added a £500million contribution through local government would also help those bracing the cold this winter.