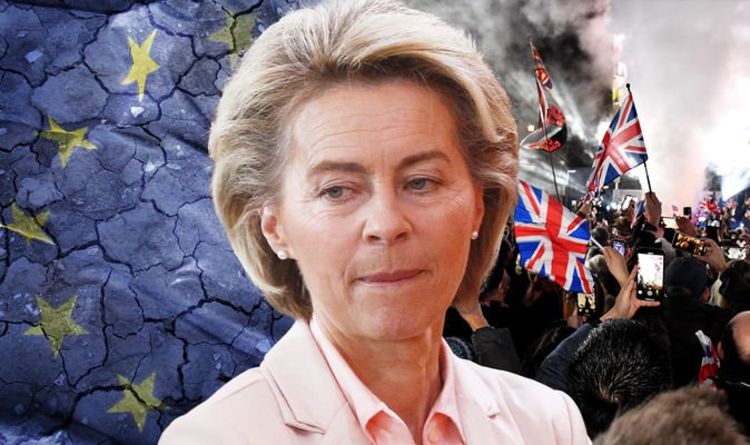 Brexit sent shock waves reverberating throughout Europe, with the UK formally leaving the bloc on January 1, 2021, following nearly 50 years of membership. A year on and Britain has wasted little time capitalising on its newfound freedom, signing a number of lucrative trade deals with countries around the world. Oil giant Shell announced plans to relocate its head office from the Netherlands to the UK, while car manufacturer Nissan will make a multi-billion investment into developing electric cars at its huge factory in Sunderland.

The latest forecasts from the International Monetary Fund (IMF) also has the UK economy outperform the EU’s top economies and that of the Eurozone as a whole this year and next.

Campaign groups from some of the EU’s largest and most prominent member states – including France, Italy and the Netherlands – are now pressing for their countries to follow the UK out of the bloc.

Nile Gardiner, a foreign policy analyst and former aide to Margaret Thatcher, has warned the quickfire success of Brexit Britain has left the EU reeling, predicting huge changes for the bloc over the next decade or so.

He believes although talk of other EU member states is fairly muted, pressure will build over the next 5-10 years from Governments to hold their own referendums as the continued success of Brexit becomes even more evident.

Mr Gardiner told Express.co.uk: “The success of Brexit is being watched closely. In 10-20 years from now, the EU could look very different.

“As we have seen with the speed of Brexit, anything can happen.

“The fact the UK has made a huge success out of Brexit frightens the EU elites.

“They want to preserve the core of the European project and see Brexit as a big threat which is why some EU officials are trying to make life difficult for the UK.

But he warned attempts from certain countries to push for more “euro federalism” could trigger fightback from others that could see a “two-tier Europe” emerging.

“You will see more attempts by EU leaders to consolidate power and a greater drive for euro federalism.

“The French will drive that and the Germans might be on board with some of that agenda.

“You will see some Governments pushing for more central control by Brussels but there will be a huge fightback from Central and European countries who don’t want to see that.

“Scandinavian countries won’t want to see further integration in Europe so you could see a two-tier Europe emerging.

He concluded: “I’m in no doubt there will be growing campaigns by many countries to get out of the EU.

“The process that Brexit has begun is so powerful it will fundamentally transform the future of Europe.

“Brexit is about democracy, sovereignty and freedom in practice, and they are immensely powerful forces the European rulers won’t be able to stop.”