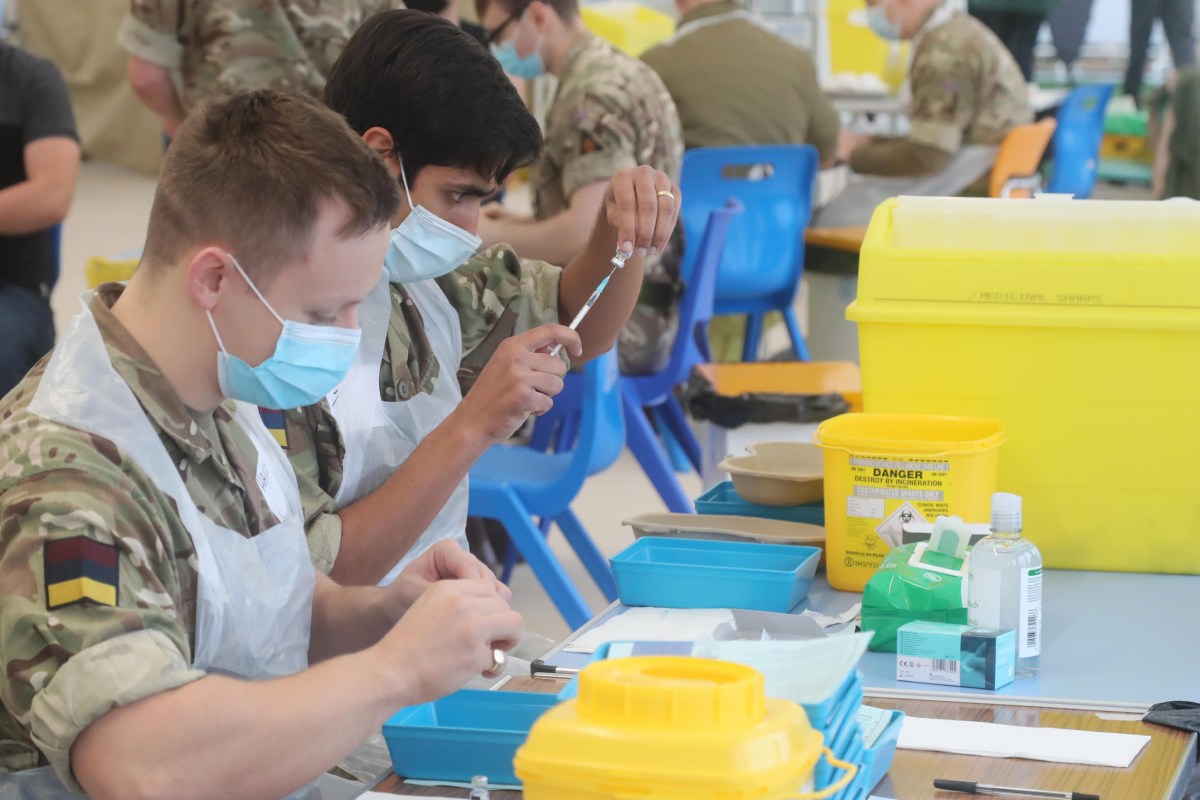 HUNDREDS of troops have been sent into London hospitals to fill the gap left by NHS staff shortages.

Wards have been left short as dozens of medics have been forced to isolate for at least a week with Omicron.

While Omicron has swept through the country and infected record numbers, a string of hugely positive studies show the variant is milder than other strains.

The first official UK report revealing the risk of hospitalisation is 50 to 70 per cent lower than with Delta.

Covid booster jabs protect against Omicron and offer the best chance to get through the pandemic, health officials have repeatedly said.

The Sun’s Jabs Army campaign is helping get the vital extra vaccines in Brits’ arms to ward off the need for any new restrictions.

Health Secretary Sajid Javid praised the “brilliant armed forces” for bolstering the NHS in its hour of need.

“Once again they are stepping up to assist NHS workers who are working round the clock across the capital, helping the health service through this difficult winter period where the need is greatest,” Javid said.

Around 2,000 troops are supporting the Covid response nationwide -this includes 40 military medics and 160 “general duty personnel” to back-fill sites hit by staff shortages.

The troops will be split into five-man teams, each with one medic, and they expect to be deployed for three weeks.

Defence Secretary Ben Wallace said: “The men and women of our Armed Forces…have shown their worth time and again throughout this pandemic, whether driving ambulances, administering vaccines or supporting patients in hospital and they should be proud of their contribution to this truly national effort.”

New data from London showed a drop in hospitalisations, after the Omicron outbreak exploded in the capital before Christmas.

On January 4 there had been 367 patients admitted to hospital, a drop on the previous day’s 401.

🔵 Follow our Covid live blog for all the latest updates

This time last week there were 456 people arriving for treatment at hospitals in London – raising hopes the tide is turning.

Dr Claire Steves said: “We can see that cases have really been coming down in the past week despite New Year celebrations, and now hospitalisation rates look like they might be stabilising, for now at least.

“London seems to be reflecting the South Africa data, going up steeply and dropping sharply.”

The UK’s daily Covid cases also fell for the second day in a row as 179,756 new infections were logged.

While the figures are still high the drop is a promising sign – especially after record numbers of over 200,000 earlier in the week.

However as Omicron reaches all corners of the UK, the overall picture in hospitals is more strained – with a total of 17,988 people hospitalised with Covid as of January 5.

This is up 50 per cent week-on-week and is the highest number since last February.

Thanks to the booster rollout, the PM said the country will be in a stronger position to fight Omicron when Plan B measures expire in three weeks.

Dr Steves expert urged caution over the next few weeks, warning the NHS is “already under immense pressure” with the rest of the month set to be a “trial”.

A number of trusts have declared “critical incidents” amid staff shortages and beds filling up.

But ministers have said they expect this phase to be short lived, with enough staff still on hand.

Boris Johnson insisted everything possible is being done to make sure that the people most likely to get ill are getting vaccinated, as he again urged everyone to come forward and get jabbed now.

He stressed Britain would “get through this wave” but warned “the pressure on hospital is clear – we’ve got to give the health service all the help we can through the next period”.