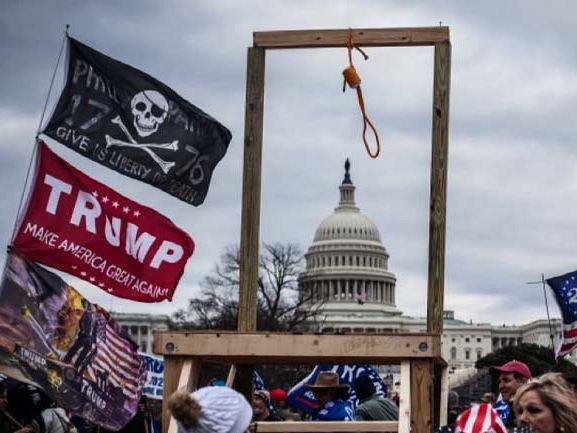 We must consider changes to the Australian Constitution to prevent an attack on our own democracy similar to the 6 January U.S. insurrection, writes David Muir.

LAST JANUARY’S attack on the U.S. Capitol was a reminder that not everyone believes democratic institutions are sacrosanct.

The reality is that our institutions may be tested at any time by those seeking power or seeking to hold on to power at any cost.

The events in Washington DC were resolved largely by force, so it is disturbing to think what might have happened if the violent mob had carried out whatever plans they had in mind.

The far-right forces that sought to overturn the 2020 U.S. Presidential Election have been influencing the protests against COVID-19 restrictions and vaccinations in nearly all of the Western world, including Australia.

By portraying any sort of government action as tyranny and a destruction of personal or political entitlements, far-right radicals seek to undermine our institutions.

Attempting to overturn democratic elections through misinformation and insurrection can happen again. Those who value our democracy must ensure our institutions will be ready.

The Australian Constitution requires the direct popular election of members and senators to our two Houses of Parliament.

Ministers are formally appointed by the governor-general under Section 64 of our Constitution.

However, the position of prime minister itself is not specified in our Constitution.

The installation of a PM is underpinned solely by the convention and practice that he or she retains the confidence of a majority of those sitting in the House of Representatives.

By contrast, the Constitution of Ireland is very specific.

Ireland has a Westminster-style parliamentary system with lower and upper houses, an executive government led by a prime minister, but also a directly elected president as head of state with clearly specified powers and responsibilities.

The Irish Constitution spells out that the president appoints a PM ‘on the nomination of’ the lower house of the Parliament and that a PM advises the president on ministers’ appointments or terminations.

It is worth pondering the possibility if an Australian PM could insist on staying in office, even if an opposition party wins a House of Representatives majority at an election.

Unlike the limited terms of a U.S. president, an Australian prime minister’s term in office ends only if they resign or have their commission terminated by the governor-general.

If a prime minister does not resign and is not removed by the governor-general, a PM’s chief requirement to stay in office is having the Parliament pass budget bills to retain supply.

An Australian PM who sought to cancel democracy could have time to manipulate the numbers in Parliament to stay in office.

In the case of a PM facing the chop, he or she might resort to advising the governor-general to call an election.

While both the Irish and Australian constitutions enable the president or governor-general to summon or dissolve Parliament, it is on the advice of the PM.

But the Irish Constitution gives the president ‘absolution discretion’ to refuse to dissolve the Parliament on advice of a PM who has lost the confidence of parliament.

An Australian PM may still play the snap election card, or if he or she has just lost an election, may seek to retain office in defiance of democracy.

In such a scenario it would be the expectation of almost all Australians that the governor-general would intervene by dismissing the rogue prime minister. But could we always rely on this expectation?

The governor-general is formally appointed by the Queen but in reality, this is done on the advice of the prime minister.

After an election, such a governor-general could merely ignore convention and refuse to terminate the prime minister’s commission.

At this point, there would be cries for the Queen to intervene and sack the stooge governor-general and appoint another to restore normality.

The 1975 Palace letters show the British Crown very reluctant to make any formal constitutional interventions. Even during the UK Parliament prorogation crisis of 2019, the Crown took a hands-off approach to the Westminster Parliament.

Fundamentally, the robustness of our Australian democracy relies on an honest, fair-minded and independent governor-general.

The current system under which the prime minister essentially controls the appointment and dismissal of the governor-general is a potential fatal flaw in our governance.

The question of an Australian republic and how our head of state would be determined is now more than a question of symbolism. It is potentially a question of the security of our democracy.

The selection and tenure of our head of state needs true independence. The current constitutional arrangements can easily be hacked by a prime minister with no respect for them.

A republic with a directly elected head of state, independent of partisan politics, serving for a fixed term and with clear and codified powers and responsibilities would provide the security against a PM trying to ignore the will of voters.

Our democratic institutions would be further strengthened by constitutionally mandating a directly elected head of state to be responsible for an independent Australian Public Service Commission. Also to hold responsibility for appointments to anti‑corruption and integrity agencies or commissions, the Australian Electoral Commission and Remuneration Tribunal as well as what are now the supposedly independent officers of the Parliament — the Auditor-General, the Commonwealth Ombudsman, Australian Information Commissioner and others.

In previous debates on the republic, the proposal of a directly elected head of state has been labelled as risky compared with the current arrangements or a republic with a head of state appointed by Federal Parliament.

With the growth of the far-Right and illiberal forces that do not respect democracy across the Western world, it is now risky to leave our current constitutional arrangements as they stand.

Only a directly elected head of state would keep a rogue prime minister in check and secure our democracy.

The old maxim – if it ain’t broke don’t fix it – will never protect us from those who believe rules are meant to be broken.

David Muir is chair of the Real Republic Australia and was a Queensland delegate to the 1998 Constitutional Convention in Canberra elected as part of the team led by former Brisbane Lord Mayor, the late Clem Jones, advocating a directly elected head of state.