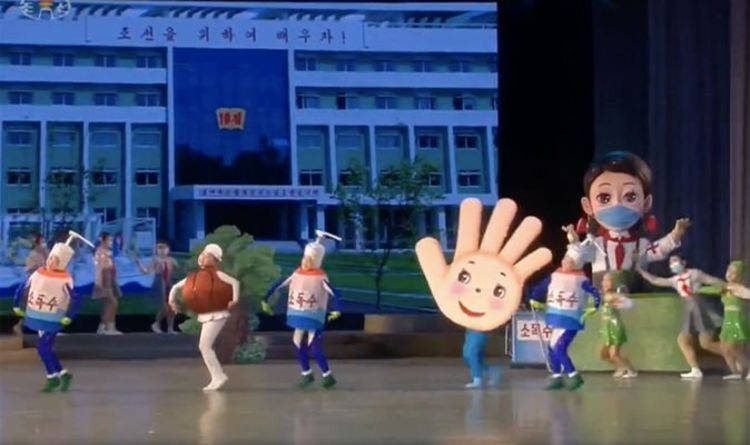 North Korea has heralded in the new year with a bizarre children’s concert, featuring songs about fighting the COVID-19 pandemic and battling the US. Footage of the concert shows dancing children dressed up as hand sanitiser bottles while lyrics urge children to follow the rules to prevent “big problems”. Children sang: “Let’s sanitise the right way. Don’t cut corners, don’t relax or there will be big problems.”

Kids then entered the stage in thermometer costumes claiming that their temperatures were never too high.

Users on social media compared the oversized schoolgirl doll to a similar-looking doll in the hit Netflix series Squid Game.

Another song involved kids dressed as soldiers performing under the slogan ‘Death to the American Imperialists!’

JUST IN: Gaffe-prone Joe Biden forgets what year it is during Covid briefing

The children sang praise for Kim Jong-un as their “father” and the ruling party their “mother”.

They also thanked the ruling party and Kim Jong-un for giving them “laughter and happiness”.

The annual concert event is intended to promote patriotism and loyalty among young children.

After the concert, thousands of people in North Korea held a rally to demonstrate “political loyalty” to the regime.

He continued: “Emergency epidemic prevention work should be made a top priority in the state work.”

North Korea, which imposed a strict blockade to prevent the spread of coronavirus, has been left with food shortages.

Pyongyang claims to have never recorded a single case of COVID-19.