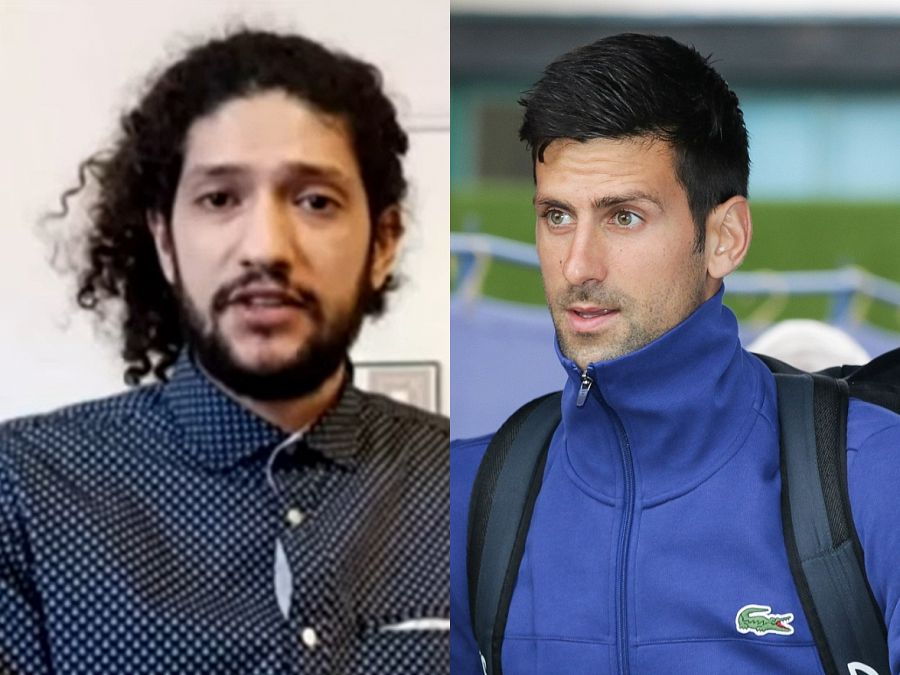 Our focus should be on refugees that have been imprisoned for years rather than Novak Djokovic’s days-long stay in the Park Hotel, writes Marion Costello.

‘It’s so sad that so many journalists contacted me yesterday to ask me about Djokovic. I’ve been in a cage for nine years, I turn 24 today, and all you want to talk to me about is that.

Pretending to care by asking me how I am and then straight away asking questions about Djokovic.’

They express powerfully the mood permeating the second floor of the Park Hotel in inner Melbourne, Australia.

At last, the mainstream media is amassed outside below the locked windows, cameras at the ready, microphones ready to thrust.

But the reporters are not there to tell the world of the refugees’ plight inside the airless and sunless confines of a second rate hotel-cum-ad hoc immigration prison, patrolled by Serco guards.

PM Morrison (we’d @ you but you blocked us), you scored a massive own goal today over #NovakDjokovic. Now even more people world-wide know about Australia’s inhumane immigration detention regime than ever before.
It’s #GameOver for you. Can’t come soon enough! #FreeTheRefugees pic.twitter.com/HnffNo78Dj

The reporters are there to chase the reflected light of world tennis champion, Novak Djokovic, who has been caught up in political machinations over so-called border security in the context of the COVID pandemic.

Djokovic is now a “guest” of the Australian government. Unlike Djokovic, who will be there for a few days only, the other “guests” are indefinitely detained.

Other than a few older men, most of the people imprisoned here, known as detainees with serial numbers to identify them, have had their youth stolen from them. They now come to adulthood scarred and traumatised after nearly a decade in Australia’s brutal immigration detention regime. Those who arrived seeking safety after perilous journeys by boat were declared “illegal maritime arrivals”.

They were “processed” offshore at Christmas Island (closer to Indonesia than to mainland Australia) and then transported to improvised detention camps in Papua New Guinea and Nauru. They were forced to live in tents that rapidly became covered in mould, surrounded by razor wire fences as they languished in the humid tropical heat. The tents were later replaced by demountable tin box temporary housing.

The “detainees” were out of sight and out of mind of the Australian public. In an environment of absent oversight and surveillance of standards, the staff of security contractors and garrison suppliers subjected the detainees, including young children, to abuse and rape.

A refugee named Reza Barati was murdered on Manus Island, others died by suicide and by untreated illness and neglect. Australia continues its colonialist project in outsourcing its problems and its prisons to poorer Pacific neighbours.

It changes legislation it doesn’t like and spends millions of tax-payer funds on expensive appeals and counter challenges in court. The United Nations recommended that Scott Morrison, now Prime Minister, be charged for crimes against the human rights of refugees while Immigration Minister.

The refugees imprisoned in the Park Hotel are known informally as “Medevac refugees”. Grassroots campaigns resulted in successful court actions that forced the Government to transfer refugees with health conditions from Manus Island in Papua New Guinea and  Nauru to Australia for medical care.

The legislation has since been changed to close that loophole. Most of the “Medevac refugees” have not received the healthcare that is needed and that they have a fundamental right to. Some have been released on temporary visas into the community, with three weeks of minimal financial support and then left to fend for themselves.

Friends have had to step in to assist, but a few have slipped through the net to homelessness on the streets during the COVID pandemic. Others have been able to tenuously start to rebuild their lives, however, they do not have permanent residency and the future is uncertain.

Refugee supporters act in solidarity with the refugees who stage daily protests inside the Park Hotel. While many of the refugees suffer from post traumatic stress disorder (PTSD) and other untreated or partially treated health conditions, they try to support one another to continue to struggle for their freedom and to hold on to hope.

Mehdi was interviewed on The Project program tonight, appearing a little more hopeful than he did earlier. Hopefully, the spotlight of international and local media on Novak Djokovic will also shine a light on the “Medevac refugees”, and other refugees imprisoned on and offshore, to win their freedom.

The UK Government plans to adopt a border regime based on the Australian model. The people of the UK and elsewhere who support human rights to oppose such a plan. The Australian Government’s policies of offshore processing and indefinite detention have results in incalculable harm to people who exercise their human rights to seek asylum.

They are escaping political oppression, wars and famines. Many of these crises have been caused by the wealthy western governments. These refugees are being punished by those same governments.

One of the largest beneficiaries of Australian Government contracts is Serco Group, which has an octopus-like grip on many former government and community services in the UK and across the globe that are now privatised for profit. This human rights abusing “profit before people” approach must be stopped and the rights of asylum seekers upheld everywhere.

Marion Costello is a grassroots activist and is a spokesperson for Whistleblowers, Activists and Community Alliance (WACA). You can follow her on Twitter: @akaWACA.