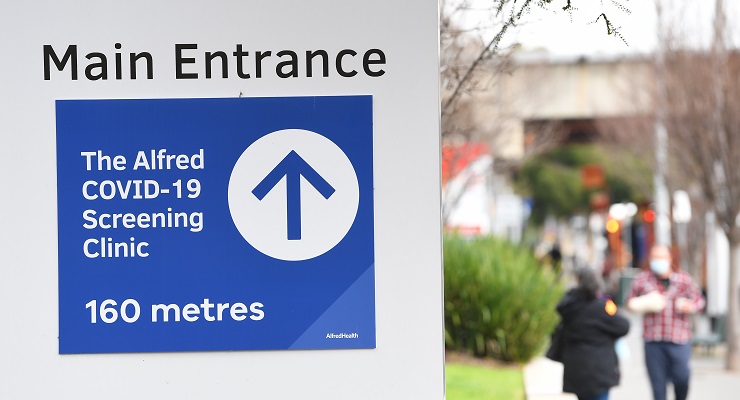 Up to 35% of staff in major retailers including Coles and Woolworths are in isolation, The Australian ($) reports, leading to shortages in food and pharmaceutical supplies. Meanwhile one of Victoria’s largest public hospitals is expecting a 15% staff shortage at the peak of Omicron’s outbreak (projected to hit at the end of January), Guardian Australia adds. Prime Minister Scott Morrison called an emergency national cabinet yesterday about the shortages, and some states acted swiftly — Queensland’s government confirmed essential workers who are close contacts of a case can leave isolation to go to work, while NSW’s critical food workers who are close contacts can leave isolation too — but only if they’re asymptomatic. Other states are expected to follow suit in easing essential worker restrictions, the AFR says.

It comes as children aged five to 11 can get vaccinated with Pfizer from today, The Age reports. Even so, Queensland’s Annastacia Palaszczuk announced the sunshine state’s school year would start two weeks later than usual, as Guardian Australia reports — she said it was too risky to send kids (who are mostly unvaccinated) back to school during Omicron’s peak.

In other news, Australia’s Governor-General David Hurley has COVID-19, ABC reports — he is in isolation at Admiralty House, but has mild symptoms and is triple vaccinated, his spokesperson added. NSW Deputy Premier Paul Toole has also tested positive for the virus — it comes after a self-described “long week” in which his wife and his three kids all received positive results too. Toole posted on Facebook yesterday that his symptoms are so far pretty mild.

BALL’S IN A DIFFERENT COURT

Tennis player Novak Djokovic relied on outdated ATAGI vaccination advice to back his exemption — that’s the claim from Home Affairs, The Age reports, as the high profile court challenge begins this morning. The tennis star remains holed up at the Park Hotel in Carlton after the government binned his visa ahead of the Australian Open. Djokovic’s camp says they received an email saying he met the requirements to enter Australia — however Home Affairs’ submission, released late last night as ABC reports, says that the email stated it was not a guarantee of entry and that he’d be questioned on arrival.

The government also said, of Djokovic’s claim he’s already had COVID and thus had immunity, prove it. “There is no suggestion that the applicant had ‘acute major medical illness’ in December 2021,” it read. Yikes. Though, Guardian Australia adds, court documents did show his case was recorded by the Institute of Public Health of Serbia on December 16. Photos of Djokovic not wearing a mask one day after his “positive test”, which he posted to his Twitter, however, probably aren’t helping his case. He also met a senior government minister on the same day, The New Daily adds (via the Serbian government website).

The only way the tribunal could proceed is if the statement was plainly wrong — and that would be up to the complainant to prove. In NSW, the state government says the bill would probably block access to justice too because claims would need to go to federal, rather than state, court — a hefty cost to the complainant.

So where is the bill up to? It’s actually in review by the federal parliament’s Joint Committee on Human Rights, who are receiving oodles of submissions from both advocates and those in opposition — including the Victorian Trades Hall Council, the Rainbodhi LGBTQIA+ Buddhist Community, and the Health Services Union — check them out here.

Amid the crush and chaos at Kabul’s international airport in the wake of the Taliban taking control of Afghanistan last year, Mirza Ali and Suray Ahmadi were trying to get to a plane (Mirza Ali was a security guard at the US embassy). When they were asked if they needed help by a uniformed soldier, they handed their two-month-old child Sohail over. They were right at the front of the crowd, as Reuters tells it, but suddenly the crowd was pushed back, and Sohail was lost.

The couple and their four other children made it to Texas, but in the five months since, Mirza Ali’s search for his son has never waned, enlisting aid workers, government officials, local authorities and the public. Then, a miracle — on Saturday, little Sohail was reunited with his family. He had been found at the airport by a taxi driver in Kabul, who at that moment swore to “raise him myself” unless the baby’s family was found. Incredibly, thanks to the campaign, they were — little Sohail is now with his doting grandfather, and they’re working on getting the baby to the US and back into the arms of mum and dad. “There are celebrations, dance, singing,” described Sohail’s grandfather. “It is just like a wedding indeed.”

Hope you’re feeling a little optimistic this morning — it’s great to be back with you.

Look, if there’s no appeal, then it’s probably going to be maybe a quarter of a million dollars. If there are appeals, it could be more like half a million. Novak Djokovic, if he wins this case, he’ll seek his costs, and we’ll have to whack that on top.

The partner at major law firm Thomson Geer Lawyers predicted it’s the taxpayer who’ll lose in the high-profile tennis star’s case, after Quill predicted Djokovic would likely win in the Federal Circuit Court today — though, he qualified, if the court finds his deportation order was invalid, it doesn’t necessarily mean he’ll play. If the Djokovic camp does win, the decision will go back to Home Affairs Minister Karen Andrews.

“It’s hard to know quite where to start with the winner of 2021’s Crikey Arsehat of the Year award. The relentless dysfunction, the contempt for accountability and tolerance for corruption, the sense he loves his title and hates his job — it billows in all directions like ink in water, drawing the eye in too many directions at once.

“Still, over the course of a single week in March, Scott Morrison managed to display a great many of the traits that ultimately delivered him one of the most comfortable victories in the history of this award.”

In a year of deception, one voice stood out. Grace Tame is Crikey’s Person of the Year

“In a year characterised by out-and-out lies, much of Grace Tame’s impact has been in simply telling the truth.

“First, her own, harrowing truth — a detailed, clear-eyed account of what was done to her as a child by an adult she should have been able to trust. Of course, before that was the fight to be able share that truth at all — for years she was legally prevented from speaking about the case, while her abuser was free to have chummy interviews with Bettina Arndt.”

Australia in 2021, governed by a smirk of a man, in a script worthy of Stanley Kubrick

“At least in the United States, they know their democracy is in trouble. They watched the insurrection of January 6. They watched much of the Republican Party attempt to cover up Donald Trump’s role in it. They watched Trump continue to control the GOP, which has grown still more extreme in the ensuing 11 months.

“They’ve seen the evidence emerge recently that Trump’s inner sanctum actually planned a coup, however incompetently — Seven Days in May, perhaps, but directed by Stanley Kubrick as a dark comedy. What fun Peter Sellers would have had playing Mike Pence, a figure straight from under Kubrick’s microscope …”

Siding with Hamas no way to bring about peace — Dave Sharma (The Australian) ($): “The idea that a boycott of the Sydney Festival is going to have any influence whatsoever on the Israeli-Palestinian conflict is fanciful. But the discredit it does to its proponents is substantial … Somehow the organisers of the Sydney Festival boycott, whose ire is directed at the $20,000 in sponsorship provided by the Israeli embassy to help stage the performance of Decadance, have ended up alongside the thugs that rule Gaza with an iron fist.

“This is the same Hamas that, when it took over from another Palestinian faction in 2007, executed its opponents by throwing them off high-rise buildings. This is the same Hamas that has criminalised same-sex activity, that denies the LGBTI community basic rights and that executed someone for the ‘crime’ of being gay in 2016 … Claims by some artists that their ‘cultural safety’ is endangered by the inclusion of a work by an Israeli choreographer, with modest financial support from the Israeli embassy, require proper explanation and interrogation.”

Working from home has entrenched inequality — how can we use it to improve lives instead? — John Harris (The Guardian): “Other questions centre on the people who now do at least some of their work not far from where they sleep. If you live alone, WFH may well represent both a degree of freedom and a snatching-away of human interaction. For young people at the start of their working lives, not being in an office will probably entail two kinds of disadvantage: being cut adrift from the collective workplace experiences that allow people to find their professional feet, and not having the domestic space to do your job effectively.

“There is, needless to say, clear evidence of how traditional gender roles affect home working: in American research done by the management consultants McKinsey, 79% of men said they experienced ‘positive work effectiveness’ at home, compared with only 37% of women. Whoever you are, moreover, there is a good chance that WFH will have increased your hours: research during the first global lockdown found that for 3 million remote workers around the world, the average working day had increased by 8.2%, or nearly 50 minutes.”