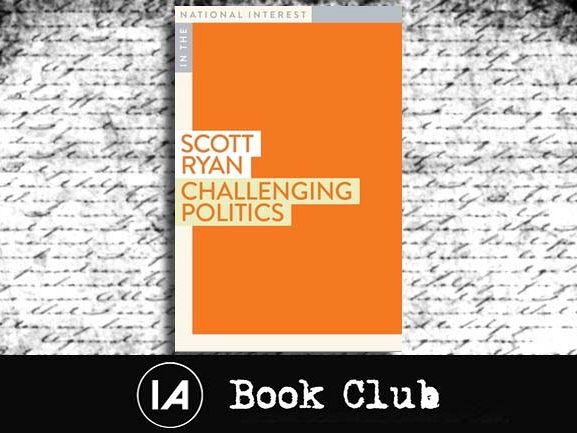 In his book Challenging Politics (part of Monash University’s In The National Interest series) former president of the Senate and Liberal MP Scott Ryan contends that modern politics has forgotten the art of negotiation and compromise. That – in the quest for easy answers – the art of skilful politics is lost. In his mind, this is often under the crux of an overbearing social media that latches onto any slight in real-time and prosecutes accordingly.

The view isn’t an uncommon one from certain types of politicians: often Liberal in values, hardworking, “old-school” in their way of operation. Nor is it particularly incorrect. Both sides of politics would argue that of social media, the decline in critical discourse has been profound — whether you find it appeals to your moral taste or not.

For the often-reticent Ryan (a generally well-respected politician and classic liberal moderate in a party veering towards a conservative slant that it may not recover from),  modern politics has sadly morphed away from what he believes in: namely helping others, pragmatism and negotiation.

Ryan reserves special judgement for parties that he believes do not take a community and broad view and instead, focus on specialised issues. This specificity, he argues, is a downfall of modern politics in Australia.

Of the Greens, Ryan holds them up as both a universal major party and a special interest one — without noticing the absurdity.

‘Whether it’s Nick Xenophon and his heirs seeking benefits for South Australia or Brian Harradine and Jacqui Lambie seeking similar for Tasmania, the new minor parties have put special claims above common ones… the Greens reinforce this approach.’

The author describes the Greens as conforming to the following trends: the demonisation of compromise; a specific ideological agenda and a lack of interest in cooperating with the major parties. His claims that they are too moralistic as an attack are misguided. He bemoans how they described the Coalition’s offshore policy as resulting in death — without acknowledging this as fact.

Ryan also fails to grasp that people’s disillusion with both major parties helps confirm the exact points he raises — namely that on many points they negotiate together and are too similar.

As such, both Liberal and Labor contain less than 100,000 members and voters look to the Greens on the Left or Pauline Hanson’s One Nation Party on the Right to represent their often-specific views and beliefs. Discarding them outright as “specialised” only further entrenches people’s criticisms, which Ryan has ironically tried to deflect from. While the author doesn’t go down Hillary Clinton‘s route of labelling voters “deplorables“, the result is the same.

An overarching theme of the book is how the modern media landscape has changed: where journalists historically used to report, they now opine. The irony of this is in the mainstream media’s favourable reporting of the author’s own party, where increasingly journalists favour ‘press release journalism’ rather than reporters actually covering the news. This is not to say Ryan disagrees with this notion — only that he doesn’t mention it in his book.

What Ryan does fail to grasp in this small piece is how the nuances of life and especially politics have changed.

The author sees conversations around issues such as climate change – including Kevin Rudd’s statement that it is “the moral issue of our time” – as often being delivered by people he views to be traditionally pragmatic in their dispositions, sometimes eschewing incandescent rhetoric. As such, he seems genuinely hurt by attacks on the Coalition’s continued use of mandatory detention, especially when it is labelled with realist labels such as “inhumane” and “racist”.

Ryan also argues that political pragmatism has brought in apolitical legislation that passed the “fairness” test. Curiously, he uses the example of mutual obligations and work-for-the-dole to highlight this “fairness”.

How these decidedly unfair and radically neoliberal policies that have only resulted in entrenching poverty and classist rhetoric pass any form of fairness test must be highly scrutinised. Disappointingly, Ryan simply notes that in the modern world these reforms are dissected and attacked rather than accepted as an example of unilateral rationality. On this, he is sub-standard in both his hypothesis and conclusion.

Quixotically, Ryan also argues that movements such as Black Lives Matter fail to uphold key and core beliefs, and also fail to develop specific demands. A quick Google search would render this statement fallacious. As such, this is an example of his political milieu more than any factual judgement.

Ryan’s unfavourable comparison between this modern-day movement and the Civil Rights Movement of the 1960s (in regard to demands) shows two things:

The book isn’t without its positives, however. An unrelenting exploration of modern politics it is not, but Ryan still understands that his party makes many decisions he does not agree on — whether they be too moderate or too conservative.

His most compelling point is when he argues for nuances to be apolitical.

‘The idea that compromise is wrong, that negotiating in order to achieve one objective and thus target another represents a lost political opportunity for a content or is a “sellout”, is one that weakens those who seek to govern and empowers those who are merely out to take care of their own issues or priorities.’

What is heartbreaking is Ryan’s unilateral belief in “the party” — whereby nearly any compromise is acceptable as long as it means legislation gets across. He wonders if the comically inept Dan Tehan, in repricing the humanities degrees (something that strained the loyalty of some Liberal Party members), should have been called out and stopped.

The author also notes that Tehan, with his immense privilege, would have likely not been impacted by these changes had he had to bear them — unlike a person of a more modest upbringing, like himself.

Sadly, Ryan chose to put the good of the party above his own morals. Beaten down by Liberal policies, he chose to follow processional politics rather than eschew the line and cross the floor in the ultimate act of democracy (something Labor discourages).

Failing to take his own side in an argument is a strong metaphor for this small book. For whether we look at the word “challenging” as an adjective – whereby Ryan thinks the job is a challenge, or a verb, where the art of politics, in general, is under sustained challenge – his conclusions are too narrow. None of them seems to serve much purpose other than to boost Scott Ryan’s self-esteem.

While challenges in Australian politics are vast, pragmatism and weak negotiations are not the answer. As Ryan unwittingly notes — this results in most opinions being cast aside for the good of a populist party. We should be better than that.

‘Challenging Politics’ is available from Booktopia for $17.95 (paperback) RRP.