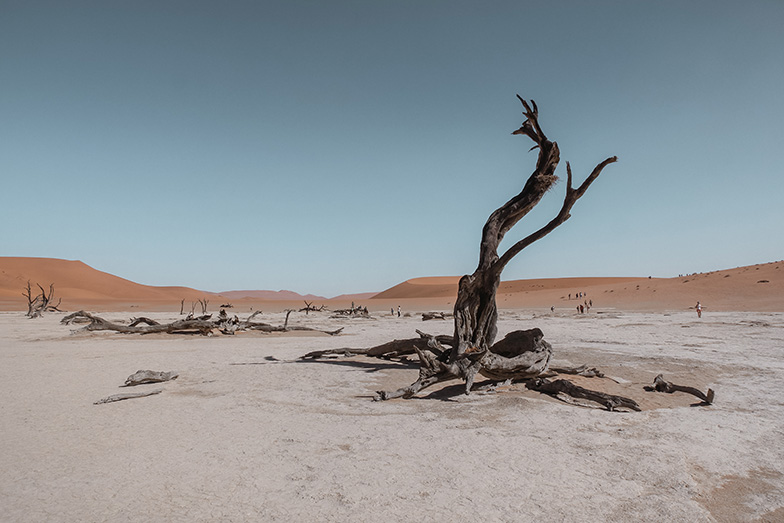 IT’S GETTING HOT IN HERE

Last year was Earth’s fifth hottest year on record, The New York Times reports, while the last seven years were the hottest by a clear margin, according to new data from the EU’s satellite system. The average temperature of 2021 was 1.1 – 1.2 degrees hotter than 150 years ago — if it rises above 1.5 degrees, icecaps could melt and envelop the world’s coastal cities and Pacific nations, while intensified storms, hurricanes, heatwaves, and droughts could endanger countless lives, and coral reefs such our Great Barrier Reef would likely die, as NPR writes.

BBC reports Europe sweated through its warmest summer ever, with Sicily reporting 48.8 degrees, breaking the continent’s record by nearly a whole degree. Indeed 10 countries — the United States, Canada, Oman, UAE, Morocco, Turkey, Taiwan, Italy, Tunisia and Dominica — either broke or tied their temperature records in 2021, with more than 400 weather stations worldwide recording new highs, The Guardian adds. The heatwave that struck the US mid-last year broke records by up to a staggering 5 degrees, which according to one climatologist, “surpassed anything I have seen after a life of researching extreme events in all modern world climatic history in the past couple of centuries”.

Methane levels in the atmosphere also reached an unprecedented level in 2021, and the growth rate was steeper than 2020, though as ABC reported, the Australian government declined to join more than 100 countries that signed on to cap methane levels at the UN Climate Change Conference. Methane comes from gas, open-pit coal mines, landfills, cattle, and sheep.

THE DJOKER AND THE POLICE IN THE NIGHT

Tennis anti-hero Novak Djokovic won his court case against the Commonwealth but could still be deported — it’s the latest in the tennis saga dominating headlines around the world. Immigration Minister Alex Hawke was last night considering whether to boot the world number one from the country for a second time, The Australian ($) reports. Djokovic would actually be banned from coming here for three years if Hawke decides to — we’ll find out more today. A triumphant Djokovic headed to Melbourne’s Rod Laver Arena last night for a late-night training session anyway, the SMH reports — he optimistically tweeted last night he intends to play the Australian Open, which kicks off in a week.

But not everyone was so chipper. Police used pepper spray on Serbian fans in Melbourne who crowded outside the office of Djokovic’s lawyers, the AFR reports. Meanwhile, his family took a thinly veiled swipe at the Australian government from Belgrade overnight, saying “obviously the fact [Djokovic] was from a small, poor country was not liked by some powerful people”, the SMH continues, though the family promptly shut down the press conference and, somewhat bizarrely, started singing a folk song after a reporter pointed out Djokovic was photographed alongside a bunch of young tennis players days after his positive test result, as Sky News reports.

Indeed Djokovic’s dad called Prime Minister Scott Morrison a “dictator” and called on Queen Elizabeth to intervene, as news.com.au reports, saying the tennis player had been treated like a “terrorist in Guantanamo Bay”. Meanwhile, fellow tennis star Nick Kyrgios has tested positive too — though has mild symptoms, CNN reports. He says he’s still hoping to play the Australian Open.

New South Wales has recorded a grim milestone — the state’s highest daily death toll of the pandemic — with 18 lives lost to COVID-19 yesterday, The New Daily reports. Countrywide we saw 71,000 cases recorded on Monday, and while Prime Minister Scott Morrison conceded the escalating total is much steeper than “our early estimates”, he continued with his tagline of “pushing through” the outbreak.

Morrison also confirmed yesterday that critical supply chain workers (like truck drivers, supermarket shelf stackers, distribution centre staff, and abattoir workers) who are close contacts of a case don’t have to isolate anymore, Guardian Australia continues, which brings the rest of the states and territories in line with NSW and Queensland. Even fried chicken is in short supply — KFC has moved to reduce its menu due to food shortages countrywide, news.com.au reports.

In WA, Premier Mark McGowan is locking out the unvaccinated from more parts of society — along with existing restrictions on large venues and nightclubs, McGowan declared yesterday that the unvaccinated soon cannot go to cafes or gyms, as WA Today reports. On a somewhat related note, ABC has an interesting story this morning about the history of medical conspiracy theories — one might think they’re a by-product of a digital era but they actually date back as far as 331BC, according to one historian. She cites a plague spreading through ancient Rome which was blamed on a ring of 170 women who were purportedly cooking up poison.

Picture the scene: Scottish knight William Wallace, portrayed by actor Mel Gibson, paces on his powerful black horse, his determined face half-covered in sky blue war paint. He stares back at the faces of his fellow Scots, urging them to take courage and strength into battle. Gibson goes on to deliver one of cinema’s most well-known lines: “… they may take our lives, but they’ll never take our freedom!”. Except imagine Gibson on a 1.5m-tall pony, rather than a horse.

A new study has found that most medieval warhorses were actually pony-sized — they looked at the bones of about 2000 horses dating from the 4th to the 17th centuries (Braveheart was set in 1280) and found they were, as The Guardian puts it, “a much slighter, daintier animal” than we recreate in our Hollywood epics. The biggest horse they found was 152 centimetres, unearthed on the grounds of Trowbridge Castle in Wiltshire. But researcher Alan Outram, from the University of Exeter, says it’s not how big it is, it’s what you do with it. The smaller horses were better for harrying a retreating enemy or carrying out long-range raids, he explained.

The Commonwealth has made available 10 million RAT tests to the states and territories but they’re not providing any to Western Australia, we’re the one state that is not getting any.

The WA premier said he’d written to the prime minister to complain about being left out, but a government spokesperson pointed out to the ABC that, until yesterday, rapid antigen tests were actually banned in Western Australia — a law which was enforced with a hefty fine of up to $20,000.

“Bunnings uses FlexBooker as part of their Drive & Collect service, the chain store’s contactless collection service launched during the pandemic. One customer showed Crikey an email from [Troy] Hunt’s Have I Been Pwned service warning them that their email had been included in the data trove shared online.

“Bunnings’ chief information officer Leah Balter confirmed that customers’ data could be included in the leak. She said this leak would only include customers’ full name and email address as Bunnings does not collect credit card numbers, phone numbers or passwords when using FlexBooker.”

As Djokovic hearing unfolds amid streaming fails, reactionaries flock to the tennis star’s cause

“For starters, the sometimes banal, arbitrary nature of our border regime is suddenly in the spotlight. It’s a system where a single minister has immense discretion who comes to this country and the circumstances in which they come, and where protracted legal battles over a stray subsection of the Migration Act are commonplace …

“As Djokovic and his family complain about the conditions in the Park Hotel, refugee advocates hope asylum seekers who’ve stayed there for months won’t be forgotten. Last year, some found maggots in their food, while many were sickened by a COVID outbreak.”

“Trump and his allies had several contingencies to accomplish their coup. Then-vice-president Mike Pence was to preside over the joint session and supervise the count. The first option relied on Pence to reject electoral votes from several states, leaving Trump ahead albeit short of 270 votes.

“Then Pence would either declare Trump the victor outright due to his purported lead from accepted votes, or force the House of Representatives to decide. However, Pence had no authority to ignore valid, certified votes. Trump, a man who never met a rule he wouldn’t break, wanted him to do so anyway.”

US, Russia talks begin to avert one of the biggest geopolitical crises since the Cold War (The Wall Street Journal)

Uganda reopens schools after world’s longest COVID shutdown. What did it cost? (The New York Times)

The Coalition’s ‘hands-off’ approach to aged care COVID outbreaks is having heartbreaking consequences — Sarah Russell (Guardian Australia): “When the federal government decreed that Australians should ‘live with COVID’, the safety of older people living in aged care homes was once again not on the Coalition’s radar. In yet another predictable disaster, COVID has spread like wildfire in aged care homes.

“On Christmas Eve, 105 aged care homes around Australia had an active outbreak. Two weeks later (January 7), the number of homes with an outbreak had exploded, more than quadrupling to 495. There are 168 outbreaks in New South Wales, 133 in Victoria, 69 in South Australia, 110 in Queensland, 12 in Tasmania, two in the ACT and one in Northern Territory. There are currently 1465 residents and 1875 staff who are positive for COVID. A single case — either resident or staff — has caused many aged care homes to lock residents in and families out.”

Succession is compulsive viewing — but for all the wrong reasons – Bruce Wolpe (The Age): “But the real sin is the writing. It’s terrible. Every time the writers get stuck, the F-word comes out. Several times per sentence, innumerable times per hour. To be sure, there is no shortage of such utterances in the public domain. Only recently, the former president, angry that Israel’s Netanyahu called Joe Biden to congratulate him on the election, told Axios, ‘F— him.’ Art can imitate life.

“Nothing is ever decided. Do we do this deal or that deal or no deal? Do I go with Kendall or Shiv or Roman? The answer is yes, and then not. Everyone switches sides more than the number of sides in play. Until the end, when Logan sells — and sells out his children. And tells them to you know what — which he had already done several times previously. Succession succeeds in spite of its writing failing it so badly — and that means the substance is so unreal. Too unreal for its mission.”