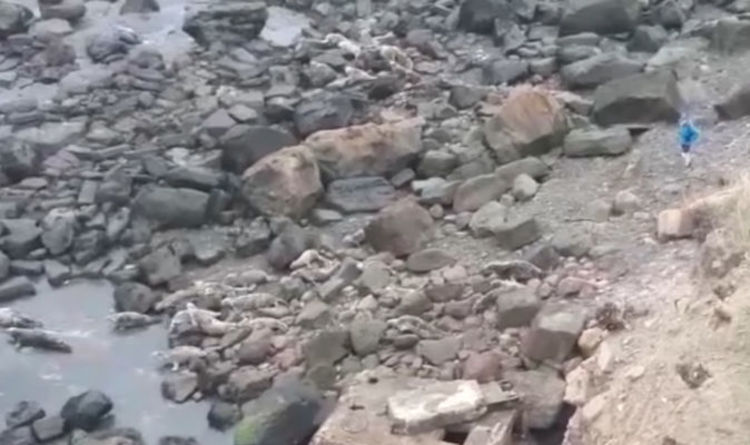 Yorkshire Seal Group released footage of the runner. The group said he had ignored the advice of one of their volunteers and approached the group “with haste”. It added that this would have “undoubtedly caused” harm to the seal and their puppies.

The group also claimed that the jogger hurled verbal abuse at one of their “seal stewards”.

The incident was recorded at around 10.50am on Thursday. The runner was last seen moving towards Robin Hood’s Bay and Boggle Hole.

The stretch of beach sits between Scarborough and Whitby on the east coast of England.

In a Facebook post, Yorkshire Seal Group said that while the majority of residents and visitors were “polite and supportive” of their conservation work, there was still an “ignorant and abusive minority who disrespect our shores and iconic wildlife”.

“All the seals impacted by this disturbance event would have, at the very least, depleted their energy reserves escaping the threat, and did not return by the end of the day including mothers that were weaning pups.”

Yorkshire Seal Group called on members of the public to share any knowledge of the identity of the runner so it could be passed on to the police.

They also asked any local business owners to share CCTV footage they may have of the jogger.

Yorkshire Seal Group founder Matt Barnes explained to the Yorkshire Post that North Yorkshire Police have an agreement with the group that when registration numbers of offenders are passed to them, they will visit the suspect’s home address to give advice on appropriate behaviour around wildlife.

This effort was part of Operation Seabird, a national campaign launched last June to protect coastal wildlife, as more people visited the coast while the coronavirus pandemic made international travel difficult.

At the time, Geoff Edmond, RSPCA National Wildlife Co-ordinator, said: “We want people to enjoy watching our marine wildlife but this should be done at a safe and sensible distance without disturbing the animals.”

Mr Barnes said: “We have a high mortality rate at the moment, around three-quarters of pups die before they are even weaned.

“Some of that is due to storm surges but a lot of it is because of drones, dogs and inconsiderate people taking selfies.

“We try and limit our calls to the police, but they will knock on doors if we manage to get someone’s vehicle registration number.

“This man was offered an alternative route past the seals which everyone else took that day, but was dismissive and abusive.”

Currently seals are protected by law. In England, it is illegal to intentionally or recklessly kill, injure or take a seal.

Conservationists have campaigned for regulations to be updated protecting seals from disturbance by humans and their pets.

A petition was made to Parliament to have the laws revised last year. The Government responded in October that it “recognises that disturbance by the public can be detrimental, and on occasion, fatal to seals. Work to explore the possibility of strengthening legislation is in early stages.”

It added that disturbances relating to dogs could potentially be penalised under the Dangerous Dogs Act of 1991 or the Dogs Act of 1871.

It said the UK had a “strong track record in marine conservation”, being home to 38 percent of the world’s population of grey seals and 30 percent of the European subspecies of common seal.

However, it noted that seals “are vulnerable to any kind of human interactions, either deliberate or unintentional”.

Last spring, it launched the “Give Seals Space” campaign with the Seal Alliance to raise awareness of the human impact on seals.