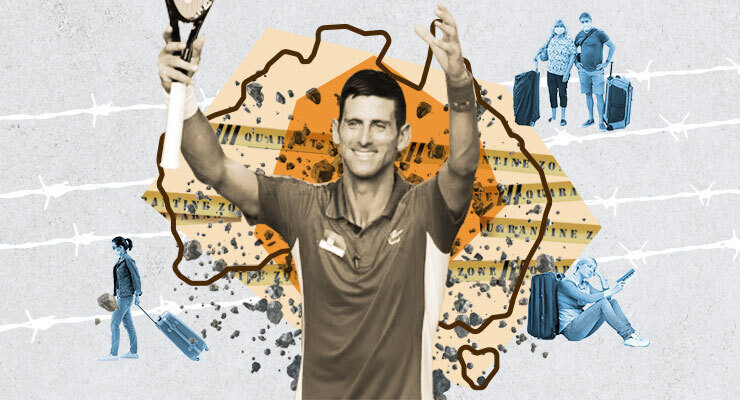 After a day in court and nearly two years of strict COVID-related border controls, the latest chapter in the Novak Djokovic saga ended in deep embarrassment for the federal government, immigration bureaucrats and the lonely remnants of Fortress Australia.

In the end, the backdown was swift. After presenting the government’s case for little over half an hour, barrister Christopher Tran effectively conceded Border Force officials, acting as delegates for Home Affairs Minister Karen Andrews, had made procedural errors in the lead-up to cancelling Djokovic’s visa. Judge Anthony Kelly then quashed the decision to cancel the tennis star’s visa, allowing him to leave detention and head to Rod Laver arena for a victorious photoshoot.

Djokovic’s court win isn’t a judgment on the legitimacy of Australia’s “no jab no entry” immigration policy, or what exactly qualifies as a medical exemption. The government’s case unravelled over singular acts of bureaucratic incompetence.

In the small hours of Thursday morning, officials promised Djokovic until 8.30am to seek advice about the proposed cancellation. They reneged on that, abruptly cancelling his visa at 7.42am. One official wanted the matter resolved before their shift ended.

But beyond the minutiae on which yesterday’s ruling turned, the matter has bigger ramifications — for the Morrison government, Border Force, Tennis Australia, and the future of the Australian Open. The ball is in the court of Immigration Minister Alex Hawke, who still has the incredibly broad power to cancel Djokovic’s visa and effectively ban him from Australia for three years.

Tran flagged this possibility yesterday, as soon as Kelly had delivered his ruling. And the judge warned that “the stakes have risen, not receded”.

Hawke, an ambitious minister and key factional ally of Prime Minister Scott Morrison, is considering whether to cancel Djokovic’s visa. Politically this would be a major doubling down from the government on maintaining tough, pandemic-driven border rules, even as the Omicron variant surges across Australia.

“Rules are rules, especially when it comes to our borders,” Morrison said last week.

But within the Coalition there’s already been pressure for Hawke to let Djokovic stay. Retiring Bennelong MP and former tennis pro John Alexander said: “The minister’s ‘personal powers to cancel visas’ are designed to prevent criminals otherwise walking our streets, or to prevent a contagious person otherwise walking our streets; they’re not designed to assist in dealing with a potential political problem of the day.”

Meanwhile, conspiracy-brained backbencher George Christensen was crowing about the government’s defeat in court.

Any move by Hawke to deport Djokovic would be legally risky too. It would be likely to have lawyers back in front of Kelly, this time to argue the substantive issues around the visa cancellation. On yesterday’s evidence, his honour wasn’t all too pleased about the government’s handling of the matter.

Then there’s the immense reputational fallout for Australia, regardless of Djokovic’s ultimate fate.

The Australian Open is one of the few times the rest of the world glances Down Under, about which Tennis Australia and the Victorian government are both acutely aware. It’s why the body persevered with last year’s tournament in the midst of a COVID outbreak and in spite of tough quarantine restrictions, at a loss of $100 million. It’s why they were so desperate to make sure the 20-time grand slam winner could play at Melbourne Park this year, irrespective of his vaccination status.

And it’s why Victorian Premier Dan Andrews anxiously warned last year that if the show didn’t go on, Melbourne would lose its grand slam for good.

Banning the top men’s tennis player from Australia could put one of Australia’s few international sporting events under existential threat, a real fear given the Formula One Grand Prix has been lost two years running.

No matter what Hawke (i.e. the federal government) decides, there’s no changing the broader public perception that an elite athlete armed with a team of gun lawyers was so easily able to get around painful border rules that have kept families apart for nearly two years.

There’s no changing the international confusion at Australia’s arbitrarily authoritarian approach to borders and treatment of asylum seekers who briefly shared a detention hotel with the world’s best tennis player.