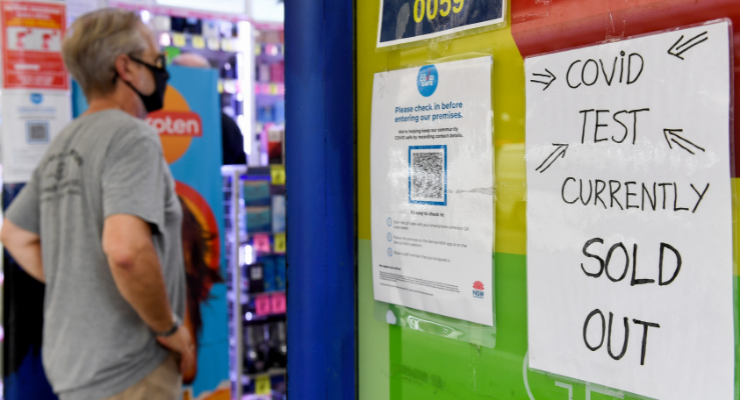 Food shortages could be about to get worse, The Australian ($) reports, in part because RAT tests are so hard to come by. Prime Minister Scott Morrison is meeting with major industries today to discuss an isolation rule change for the short-staffed critical workforce — whether to excuse close contact workers in industries like road, rail, air, and sea transportation; veterinary and animal welfare; education, early childhood and schooling; energy and water supply; sewerage and sanitation as well as waste recovery. But workers would need to test negative on the first day for the rule change to work, industry leaders are warning. Among the shortages we can expect in the coming weeks, The Age adds, are chicken products, red meat, fresh fruit and vegetables, as well as possibly milk,

So why are RAT tests so hard to find? Well, the AFR reports this morning that the peak body for diagnostic testing released five statements last year cautioning against their widespread use, with one as recently as the end of December. The Royal College of Pathologists of Australasia barracked for PCR testing instead — as per the science — because we didn’t have that many cases, but the paper said the “negative tone” that developed towards RAT tests might be why we didn’t have a stockpile ready when our PCR testing was suddenly overloaded by Omicron.

Yet the government had fair warning, ABC reports this morning. A public health specialist reckons he told several Coalition and Labor pollies back in August that the overload would happen and urged them to stockpile RATs. But, as the AFR continued, Australia actually didn’t even approve RATs until November — some 11 months after the US approved them. Ironically, the Ellume home test, popular in the US but not yet approved here, is made in Brisbane, as The Brisbane Times reports.

Opposition Leader Anthony Albanese has pledged $200 million a year to help prevent or prepare for bushfires, floods and cyclones, which would be matched by state, local, or territory governments, Guardian Australia reports. The idea is to shore up flood levees, sea walls, cyclone shelters, evacuation centres, fire breaks, and telecommunication, using the interest accrued on our Emergency Response Fund (ERF). It’s a change of pace for the government, who usually pour money into post-disaster recovery — but a 2015 productivity commission report found we weren’t doing enough to prepare ourselves before the fact. Yet, Albo claims, since the ERF was announced three years ago, the government hasn’t spent a cent on a prevention project.

Meanwhile, in Western Australia hundreds of tourists and residents have been rescued by fire crews in Bunker Bay and Eagle Bay, The West ($) reports, as a bushfire burns out of control in the south-west. About 150 firefighters are battling the blaze, though no homes have been lost, news.com.au adds. In Queensland, the body of a man who had been swept away in deadly floodwaters has been found, though the search for a missing 14-year-old girl continues, The Brisbane Times reports. The cause of the disaster, Premier Annastacia Palaszczuk says, was “an unforeseen rain event” that the Bureau of Meteorology could not have predicted.

Immigration Minister Alex Hawke is stuck between a rock and a hard place, former Immigration Department deputy secretary Abul Rizvi told The Australian ($). Hawke is deliberating over whether to deport tennis star Novak Djokovic, and Rizvi says he has three choices: let the world number one stay, which means working out a way he could play the Australian Open without being a health risk, cancel his visa through “natural justice” which means giving the lawyers up to two days to respond while Djokovic is detained again, or simply declare Djokovic a public health risk and give him the boot.

It’s day six of the saga, which has now zoomed in on the accuracy of Djokovic’s travel document, Guardian Australia reports. Border Force is investigating his Australian Travel Declaration, a landing form which said he had not travelled to any other country in the two weeks before arriving here. But photos on social media appeared to show the tennis star in Belgrade on Christmas Day, and then training in Marbella, Spain in early January. Incidentally, we also learned yesterday that Djokovic’s lawyers, Hall & Wilcox, had to give him an exemption so he could show up to their Melbourne office because it usually only allows in vaccinated people, as the SMH reports.

Vale sweet Magawa, a mine-clearing rat who received a medal for bravery, who has passed away peacefully aged 8. Across his illustrious five-year career, Magawa sniffed out more than 100 dangerous landmines and explosives in Cambodia, as BBC tells it. His impressive tally made him the most successful trained rat at Apopo — that’s a Belgian charity where rodents go through a rigorous year-long program before venturing into the field. Why? Well, the rats weigh less than a bag of sugar, so when they scurry across the land their bodies don’t trigger the mines. When they sniff one out, they alert the human handlers who then safely remove the mine. There are estimated to be about six million landmines in Cambodia, but Magawa managed to clear more than 20 football pitches worth of land. And, by golly, he made quick work of it — Magawa could scour a tennis-court-sized area in 20 minutes flat, something that might take a human up to four days.

In 2020, Magawa became the first rat to be awarded the PDSA Gold Medal — the George Cross for animals — to thank him for his “life-saving devotion to duty”. He retired last year and had been enjoying a life of leisure and play ever since. On the weekend, Magawa started sleeping a little more and declined a bit of food, peacefully departing this world a little while later. The charity paid tribute to the heroic rat, saying he had allowed “communities in Cambodia to live, work, and play; without fear of losing life or limb”.

Sending you a little of Magawa’s courage and grace this Wednesday morning.

I got it wrong, I thought that it’d be game, set, match that [Novak Djokovic] hadn’t been double vaxxed and he would have been asked to go. But I got it wrong. So, I’m not going to pretend to be a solicitor again.

A politician admitting they got something wrong, now there’s something you don’t see every day. The country’s second-in-command said he’d made the wrong move in backing calls for the 20-time Serbian Grand Slam champion to be booted out of Australia — could this foreshadow Immigration Minister Alex Hawke’s final decision on whether to do a visa cancellation sequel?

The Djoke is on us

“All possible worlds — COVID-19, anti-vaxxers, sport, Scott Morrison’s dire political fortunes and (least importantly) Australia’s gothic horror migration system — have already collided in the fulcrum of the most profound question we could ever ask ourselves: how badly do we hate the Djoker? Badly enough to kill the Australian Open?

“A more perfect metaphor for the chasm in Australia’s soul could hardly be found. Lionise or demonise? Call it the Warnie syndrome, but it goes back past Ned Kelly. The fact that Djokovic is a foreigner hardly matters. So was Breaker Morant. Rules, as Morrison said with his usual facility for the facile, are rules. They apply with equal arbitrariness, subject to unexpected poll-driven reversal, to everyone.”

“This disastrous period has a flavour of generalissimo government, an arrogant disdain for the people that is almost sensual. Morrison’s ever-ready impatience with actual questions has become a pre-emptive irritation.

“In those couple of disastrous press moments, with the stories about stopping to buy a test (apparently a lie), Jenny buying one (possibly true), and a homily about self-reliance and the private sector, one heard the irritated Sunday school teacher — which Morrison has surely been — snapping at someone asking a question that’s not about the book of Esther. The Thick Of It-style omnishambling?”

“Other opportunistic individuals have been able to latch on to the cause as well … Current MPs George Christensen and Craig Kelly both posted online in support of the judge’s decision and of Djokovic.

“Even Nigel Farage — who once tweeted that the UK should copy Australia’s harsh border regime — celebrated Djokovic’s legal win and even posted a video online of a visit to Djokovic’s brother, Djordje (to which fellow tennis star Andy Murray tweeted: ‘Please record the awkward moment when you tell them you’ve spent most of your career campaigning to have people from Eastern Europe deported’).”

Omicron could infect 50% of Europeans in next two months, says WHO (The Guardian)

What is racial invisibility, and how do white people benefit from it? — Luke Pearson (IndigenousX via Guardian Australia): “It’s important here to point out that most white people in Australia don’t like being called white. If you’re white and you’re reading this, I’m sure you’re starkly aware right now that I have been naming whiteness. You might like that I’m doing it or you might not like it, but I bet you’ve noticed it. It is still not a common occurrence in Australia for whiteness to be named.

“It was common within western literature that the terms ‘people’ and ‘white people’ were readily interchangeable, but with ‘white people’ falling out of fashion, that meant that white became only ‘people’. But they still kept all the racialised adjectives, classifications and slurs for everyone else. In white Australia, this means that white Australians stopped being white Australians and became ‘just Australians’ … They do not assimilate into the culture that was there before them; in fact, they find the very idea so laughable as to be offensive.”

Hard to be optimistic as COVID pandemic enters third year — Jeff Kennett (Herald Sun) ($): “So where is the light? I so desperately want us to be able to get on with our lives with some predictability … The rules, restrictions, requirements are changing every day. Everyone is confused. Our health workers, and ambulance officers are exhausted while their masters take holidays at beach resorts. The inequalities in the community have never been more pronounced … What if we do not have enough teachers available, how will schools open? No more schooling from home surely? Single parents will go completely spare.

“I just want to somehow wave a magic wand. I want things to be right again, as we all do. I want to be able to plan with certainty, to build the things that matter. I want to have fun, but it is as though the lights have been turned off … We must believe that collectively, together we will emerge with a greater respect for what we had. A slightly different society. Maybe some major challenges to address and overcome and from which to learn and improve. We must believe in our capacity as a society to overcome the disruptions to our lives today, to rebuild, and to look after those who are less fortunate.”