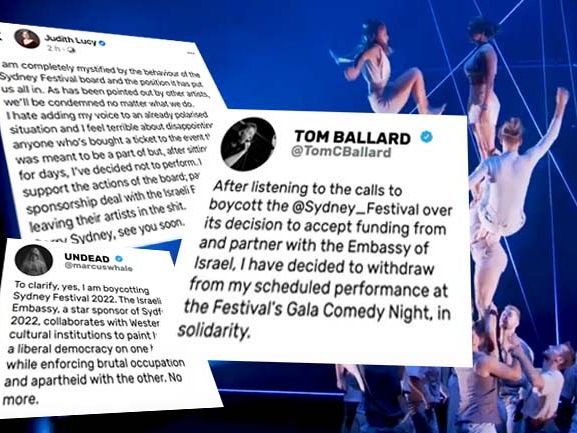 The corporate media has slammed the boycott of the Sydney Festival describing the move as anti-Semitic, writes Dechlan Brennan.

THE CULTURE WARS in Australia have always focused on ostracising the colonised people throughout the world, whether it be at home with Indigenous Australians or First Nations people overseas. So, when it comes to issues around the apartheid policies of the Israeli Government towards Palestinian people, it should come as no surprise that more often than not, Australia chooses the side of the aggressor.

Anything other than unequivocal support of Israel often results in people being denounced as anti-Semitic. This, despite criticism of the Israeli Government having no correlation with the insidious attacks on the Jewish faith that make up the historic crime.

These claims can be seen accurately through the lenses of the recent mass artist boycott – orchestrated by the Boycott, Divestment, Sanctions movement (BDS) – of the prestigious Sydney Festival and the response towards the artists from many in the corporate media.

The Sydney Festival and the Israeli Government

The Sydney Festival is an arts event that should be the resurrection of an industry that has been appallingly treated by the Morrison Government during the recent pandemic. The decisions by the board have sadly rendered this impossible.

In May, the festival agreed to accept $20,000 from the Israeli Government, platforming them as a star sponsor in the process. The Middle-Eastern nation has attempted in recent times to whitewash its settler-colonial image through a raft of art sponsorships, trying to obfuscate from Human Rights Watch noting that Israel operates a regime of apartheid and persecution.

The boycott should not in itself be controversial; politics and the arts are historically intertwined. The Sydney Festival even promotes solidarity with First Nations people.

For many, the disappointment is that a festival originated around progressiveness can be so easily bought by a government that shuts down Palestinian cultural events and centres. The board’s insistence on keeping the money and ignoring pleas for it to be returned has sparked a split in the community. For the Australian corporate media however, the reason for this boycott is simple: anti-Semitism.

He continued this hyperbolic attack telling host Cory Bernardi that despite describing himself an advocate of free speech:

“It’s a disgrace, it’s contrary to those that support human rights and frankly, I think we need laws in this country to deal with it more firmly.”

In the right-wing Spectator Australia, David Schulberg attempted a similar false and damning line of attack.

🧵 THREAD: A timeline of events leading up to the #SydneyFestival boycott campaign.

1/ Sometime in November, the Sydney Festival 2022 program and website was released. Arab and Western Sydney-based artists noticed the inclusion of Israel as a sponsor of the Festival.

After besmirching various academics who side with Palestine – often without actually contacting them directly for a response – he once again showed the hypocrisy of the right-wing, pro-small government crowd by imploring those in power to act against peaceful protests:

‘May I suggest that they have the option of organising their own alternative Jew-free arts festival. Perhaps it is time for our governments to be seriously considering anti-BDS legislation.’

This misnomer is a proclivity for many — no more than a way to stifle debate on Israel and their indefatigable policies of ridding Palestinians from their own land. For many attacking the BDS, their entire raison d’etre revolves around making sure marginalised voices are never heard.

Jennine Khalik – a Palestinian Australia who was 21 at the time she worked as a reporter for The Australian – was once targeted by Israeli diplomats, who were concerned about her pro-Palestinian position in various stories. At one point, a sub-editor at the paper berated her in front of her colleagues for daring to use the term “Palestine” in an article.

Khalik no longer works for the paper and has used her social media following and voice to raise awareness over the boycott.

Speaking on The Project, Khalik summed up the hypocrisy of people who have attacked the boycott:

“If Palestinians respond to armed military occupation with armed resistance, they’re denounced as terrorists… and so BDS is also this other way. Yet still, Palestinians are being told that it is unacceptable and anything we are going to do is going to be met with backlash.”

The Sydney Festival was supposed to be the city’s cultural comeback, but acts are boycotting the festival due to a decision to accept funding from the Israeli Embassy. @jennineak organised the boycott and tells us more. #TheProjectTV pic.twitter.com/YFqeS0xDBI

When I spoke to her, she was in the midst of continuing her hard work in promoting the boycott, all the time continuing to be criticised by Zionists on social media.

Despite these often defamatory and personal attacks – often from supposed “allies” on the Left – she remains stoic in her aim to return to Galilee, a home that she isn’t allowed to visit:

“We all belong to the international community, artists included. Palestine is a litmus test for progressives today and in a few years’ time, many will look back with embarrassment and shame at how flippant and dismissive they were in the face of these calls for solidarity.”

Correlating the Israeli Government with anti-Semitism

Investigative journalist John Lyons recently released a book on the powerful Israel lobby: Dateline Jerusalem. The work’s premise centres on various pro-Israeli groups exerting undue pressure on editors to push only one side of the Israel-Palestine conflict.

Any mention of Palestine as “victims” or Israel as “aggressors” is met with belligerent condemnation — often bordering on hysterical.

Veteran journalist Hamish McDonald summed up the feeling of many in the industry when he lamented that:

“If you are a journalist in your twenties or thirties, you may worry about upsetting the Israeli lobby.”

Many media newsrooms accept that the grief incurred for reporting on Palestinian issues is not worth it, even if this invokes claims of censorship.

In Guardian Australia, Louise Adler surmised this as:

‘Both implicitly and explicitly it is agreed that subjects best avoided are: daily life for Palestinians, the relentless growth of settlements in the occupied territories, the concomitant moral erosion of the Israeli polity and the complexities at play within Palestinian and Israeli politics.’

This is both disheartening and egregious. B’Tselem, a leading human-rights group out of Israel, has documented human rights abuse by the Israeli Government since 1989, including claims of Apartheid policies. Israeli media organisation Haaretz has stated the same — despite a recent change in political leadership.

International groups Human Rights Watch has made similar statements whilst Amnesty International has reported heavily on war crimes committed by both Israelis and armed insurgence in Gaza. None of this should be controversial to report, but the powerful lobby has helped to make any discussion around these crimes taboo — nearly always invoking claims of anti-Israel bias, or anti-Semitism.

Politically, both major Australian parties have refused to accept the term “apartheid”, despite the overwhelming evidence. They have also both embraced a new definition of anti-Semitism that was worded by International Holocaust Remembrance Alliance (IHRA). This is despite the definition’s lead drafter Kenneth Stern admitting concern that adopting it could be used to police speech.

Whilst it was no surprise that the Liberal Party quickly embraced this definition (the Right has always had an affinity with protecting Israel), Labor Leader Anthony Albanese’s embracing of it – while simultaneously attacking the BDS movement – is disappointing.

On a Zoom call hosted by the Executive Council of Australian Jewry, he claimed that:

“I regard the BDS campaign as one that is based upon a racial targeting of a group, in this case Israel, and it is something that I have not supported.”

Going on, he displayed a lesson in obfuscation when he continued, stating that describing Israel’s policies as apartheid was false:

Mr Albanese should be reminded that one of the chief proponents of bringing down the South African apartheid regime – the late Desmond Tutu – described the situation facing Palestinians as directly akin to those facing Black people in South Africa during apartheid.

Importantly for the Opposition Leader, by eschewing the conversation around the term apartheid, adopting the IHRA definition will do little to stem anti-Semitism.

Incredible work by these Palestinian activists and their comrades. At this rate the Sydney Festival is just gonna be Benjamin Law presents the Cat Empire.https://t.co/SSJlsLLMPr

They will not be silenced

All of this is helps build Jennine’s case for the boycott. Failure to censure the government of Israel, out of a huge fear of a lobby that is backed by a corporate media filled with people willing to attack the BDS as anti-Semites, only helps to embolden the continued whitewashing of their human rights failures.

When people boycott large ticket items like the Winter Olympics, it isn’t described as “racist” or “anti-Chinese”, only anti-Chinese Government. The same is never said of attacking Israel’s aggression — it is always falsely correlated with attacking Judaism.

In response to claims by pro-Israel and Zionist groups that she is supporting terrorists, Khalik is incandescent:

“By supporting apartheid Israel, it’s actually you and others openly defending terrorism. Palestinians are under military occupation. Palestinians live under siege… you don’t want peace, you want submission.”

As for the boycott, which has seen more than 20 acts recently pull out-she sums it up neatly:

“It has been a huge, collective effort.”

Sadly, for many in Australia who protest, if you don’t do it silently and conform to the rigours of corporate Australia, you will always be criticised by those in positions of power — the media included.