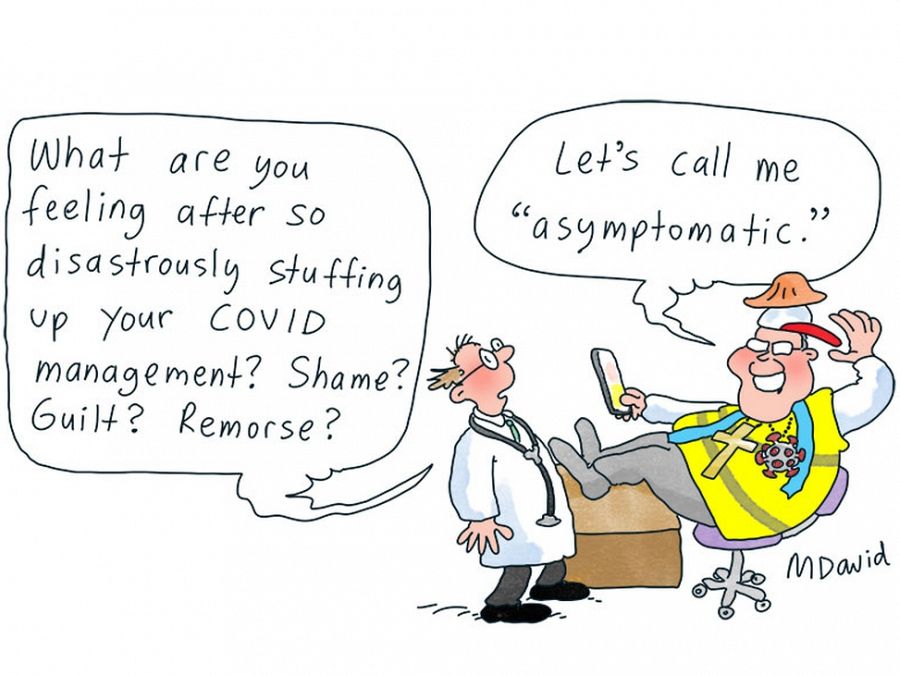 Scott Morrison and his Government have continually failed to show leadership through this pandemic, writes Joel Jenkins.

IN THE MADNESS of rush before during and after Christmas, I managed to score a two pack of rapid antigen tests (RAT) from an Officeworks, adding to the one I had left over from a family related case a month prior.

As I mowed the lawn, fresh into a new year, my sister called, showing symptoms. An hour later, as I threw one over the fence to my brother-in-law, I realised that things were already a bit different this year.

In my family unit, financial strains are already visible, as we scramble to get tests selling for $50 in some places.

With only two tests on hand between my immediate family – some of them frontline staff – at the same time as Medicare support is being pulled for polymerase chain reaction tests (PCR) and the lack of booster coverage in the general population, why aren’t other measures being implemented to protect the population?

In families living below the poverty line, a 20 pack of PCR tests priced at around $300 dollars, it also looks like paying the overdue bills or for a few days holiday.

A low-income, casualised workforce who make up a large swathe of this country’s population, the beating heart of the pandemic economy, is now being asked to take the “personal responsibility” upon themselves when they leave the door for work every day. The people that facilitate the click-and-collect, the cleaners and the meatworkers, the people that hear the unreasonable demands from white-eyed consumers in the cavernous supermarkets and salesrooms of our consumption fueled economy, are being told to take a solo journey through a pandemic.

While juggling yet another failure to listen to experts, Prime Minister Scott Morrison indicated the Federal Government was “looking at ways” pensioners may receive access to RAT at pharmacies. Even though they are in principal free for pensioners, what does that count for if there is no stock at pharmacies or supermarkets?

The workers working in the distribution centres that service the economy, the elderly, immunocompromised and the single mums out on the suburban fringes will have to hold on for now. The people that have been imposed upon to make a choice about life or death every day, without the support nor the advice from their absent leaders, are being asked to go back to work, to live with COVID at their own risk.

Some governments have urged people to avoid overloaded testing sites to test with unavailable RATS, in what’s been called a “testing disaster”. OzSAGE has warned the NSW and Federal governments that they must relieve pressure on laboratories and hospitals by procuring and distributing cheap and accessible RATs. There are mounting signs that this preparation has not been done.

Dr Chris Moy, the Vice-President of the Australian Medical Association, has criticised the Government’s lack of action in this process saying he clearly:

‘… asked and advocated for a clear plan to ensure access for RATs and clear policies for their use, for this very time which was predicted.’

Dr Moy is also ringing alarm bells about the “desperate” situation in hospitals and the worker shortages that get written out and spikewashed by media-savvy doctors.

Brisbane biotech firms Ellume and Anteotech, the people actually making rapid antigens invented in Queensland, were knocked back by this short-sighted Government last July. Another flimsy blunder in an unmitigated crisis.

Unfortunately, they aren’t taking orders at the moment, too busy packing boxes for their $300 million contract with the U.S. Defense Department, also getting in line are the European and SE Asian markets also looking fill orders. Take a ticket again.

And the people that are selling RATs seem to work too close to the crucible. Former Channel 9 Bureau chief-cum-importer and exporter of Chinese COVID paraphernalia, Stephanie Golman, is selling uncut wholesale RATs to Harvey Norman. She joins a list of unregulated cowboy medical entrepreneurs that look to make money in a pandemic.

The Prime Minister looks to abrogate his responsibility again, offsetting and outsourcing his leadership role, first to the states, now the Australian Competition and Consumer Commission (ACCC).

Undeterred by his previous bungles over the Australian summer, the PM still plates up photos of airlifted barra and Sri Lankan curry, while at the same time, in the reality of another new year of acute change and transformation, the rest of the unboosted punters scramble to make sense of the changing protocols.

Australians are frantically looking for the fresh and faint parameters of the newly heralded “age of personal responsibility”, we are also trying to understand the Government’s role in it.

The RAT is something that compliments the “personal responsibility” being touted by leaders. They are essential in reducing spread and hospitalisations in this society trying to achieve a sense of normality. They allow individuals to diagnose and lockdown to preserve the health of others.

By not facilitating access to affordable testing, this Government has further deepening a class divide that is already showing in the households of many Australians and perhaps along the way has unintentionally handicapped its “live with it” ideals.

This Government has demonstrated a lack of cohesion, preparedness and desire to anticipate this reality it has imposed on us. By not scaling the testing infrastructure to accommodate exponential surges in the virus, it hasn’t even bothered to give this thing a fighting chance.

All the muted screams from the people in and around the straining health industry and the victims of this disease will soon be heard, as the overwhelming case numbers catchup with the staff burnouts and the acute strain on vital health infrastructure.

It is astounding to think, as Omicron unleashes itself onto a largely unboosted population, that this Federal Government and its take-two protegee in NSW have passed the mic completely to us. After  Hawaii and the absenteeism, what were they thinking?

The libertarian politicians and anti-democratic agitators seem to wish for us to return to a form Hobbesian “natural law”. We now peek out our windows and see the fires on the street, unable to navigate the stark reality of a lucky country that may have somehow turned the horseshoe around.

Without the guidance of the Government and the lack of scrutiny from a wayward press, we see people struggling to make sense of this deepening crisis, unable to navigate the realities of the pandemic.

People caught up in vaccine-mandate protests, indoctrinated by conspiracy that has been sown into the mainstream dialogue by dangerous MPs and an insurgent media. The new year began with a further lurch away from reality for the media; the next day someone set themselves alight in a car mid-anti-vax rant. 2022 didn’t take long to tell us what it’s going to be like.

As the Prime Minister, who has over seen a questionable period of government spending, tells us “you can’t make everything free” regarding to RATs, all the while asking us to avoid PCR testing and to “live with this virus”, we must ask if this is reasonable.

When he says he won’t “undercut” retailers by funding free RATs, what Morrison really means is that he has lost the desire to lead the nation in this pandemic and that his Government is undeterred by the procurement and supply disasters riddling its handling of this health crisis. All of this in an election year.