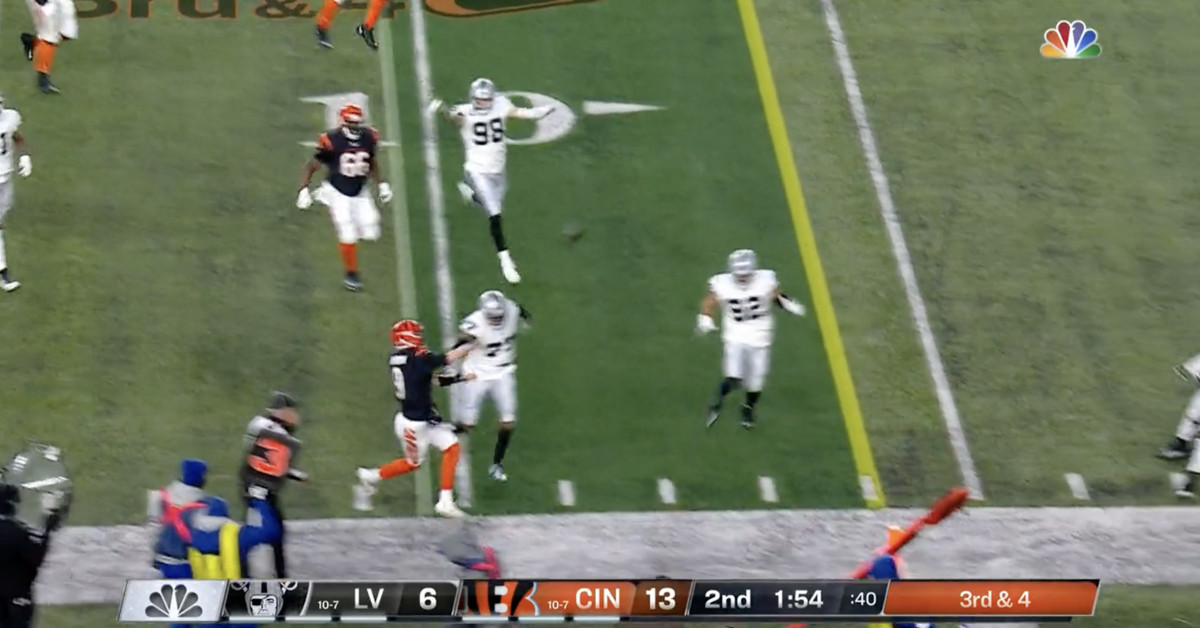 The Cincinnati Bengals were driving deep into Las Vegas Raiders territory in the second quarter of their first round game in the 2022 NFL Playoffs when a controversial play swung the tide of the matchup.

On a third-and-four play inside the red zone, Bengals quarterback Joe Burrow rolled to the right sideline to avoid the pass rush and fired a bullet into the end zone caught by Tyler Boyd. It appeared that Burrow may have stepped out of bounds before the threw the pass, but the play was ruled a touchdown on the field. A replay confirmed Burrow wasn’t even close to stepping out of bounds before he threw the pass.

There was only one problem: an official blew his whistle while the ball was in the air. By rule, the play should be dead and the down should be replayed because of the inadvertent whistle. Instead, the touchdown was able to stand, and the Bengals took control the game.

It’s easy to hear the whistle just before Boyd caught the ball in the end zone. It’s not like the Raiders stopped playing when they heard the whistle, but the rule is the rule, and the rule states the play should be dead on an inadvertent whistle.

Former NFL referee Terry McAulay joined the NBC broadcast and said the down should have been replayed becase the ball was still in flight when the whistle blew. “They can’t have a touchdown on that play by rule,” McAulay said.

Here’s how the rule is stated in the league’s official rulebook:

“when an official sounds his whistle erroneously while the ball is still in play, the ball becomes dead immediately …”

“(3) If the ball is a loose ball resulting from a legal forward pass, a free kick, a fair-catch kick, or a scrimmage kick, the ball is returned to the previous spot, and the down is replayed.”

Raiders fans will certainly be upset about this and believe they got screwed over on a touchdown throw. If the refs did make the Bengals replay third down and wipe the touchdown off the board, then the Bengals would have felt screwed because the whistle never should have blown.

Either way, this was a huge call that changed the game. There’s a scenario where the Bengals would have had to settle for a field goal if the play was blown dead and they couldn’t convert on the replayed down.

The reality is NFL refs need to be better in the biggest games and biggest moments. The officiating was rough throughout Bengals-Raiders, and this amounts to a serious black eye.

Expect a league statement eventually. We’ll update this story as it develops.