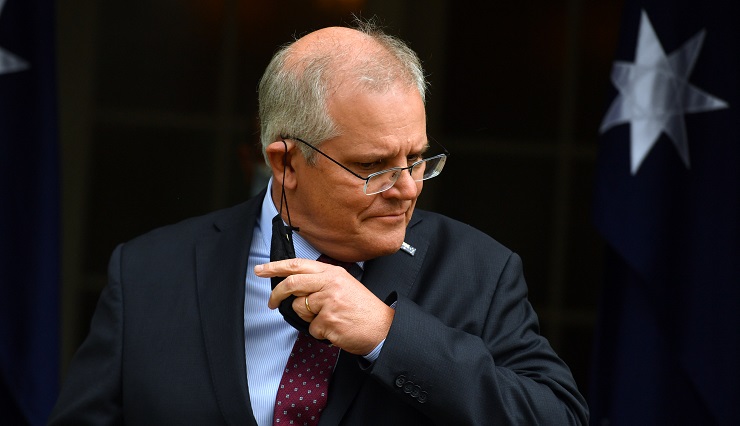 We pick up where we left off, with the Morrison government lurching from one bungle to another, not merely stuffing up the simple deportation of an unvaccinated tennis player who should never have been let in the country, but the altogether more serious challenges of ensuring sufficient COVID testing capacity and preventing the inevitable consequences of its own national reopening plan from wrecking supply chains and service industries.

The result is a national shortage of rapid antigen tests (RATs) in a world awash with the things, kilometres of empty supermarket shelves around the country, and a continuing crisis in aged care due to lack of staff, with a permanent state of lockdown for tens of thousands of seniors across the country for the foreseeable future.

If the vaccination rollout debacle was, in the words of Malcolm Turnbull, “the biggest failure of public administration I can recall”, then the RAT and supply chain debacles have to be in consideration for that title as well.

The failures are breathtaking for the simple fact that they reflect a failure to think through the obvious consequences of the national reopening plan agreed, amid much debate, in mid-2021: a surge in infection numbers, but with a dramatic lowering of intensity of symptoms and rates of hospitalisation and death due to vaccination. While the Omicron variant may have changed the numbers at the margin, Australia’s plan was always to accept a massive increase in infections, while serious cases remained low and primarily confined to the unvaccinated.

Yet no one within the Morrison government undertook any planning for exactly the scenario we were relying on to transition back to something vaguely approaching normal — how do we deal with large numbers of infected workers, how long do they isolate, if at all, how do they get tested, how long are they required to be absent from the workplace, how long might they be absent because they’re ill, and how will industries with already significant workforce issues, or serving vulnerable communities, or both, cope with a large number of infections?

That failure of planning echoes the failure to avoid overreliance on one source of vaccines and the failure to properly plan the rollout of vaccinations, particularly to aged care and disability residential facilities in 2020-21, with the difference that the government has had an extra year to get planning right.

We’ve previously connected the routine incompetence of the Morrison government to Scott Morrison’s obsessive lying, and to the fact that Morrison by his own admission runs government for his mates i.e. as a protection racket, in which corporations purchase policy outcomes in exchange for donations and post-political jobs. Morrison’s preference for media conferences and press releases over actual substance is obviously another factor.

But it’s time to look beyond just the personal characteristics of Morrison’s government to see if this repeated failure is becoming systemic in Canberra. Will better government be delivered by a different prime minister or a different party? Or has something structural happened to the federal government’s capacity to function effectively?

This is a much more complex issue than simply criticising Morrison as incompetent, as even some of the most banal, centrist press gallery types have finally begun doing. Virtually no one has been trying to examine it as a public policy problem, rather than a political one: only Michael Pascoe and, today, Alan Kohler, both at The New Daily, have tried to fathom exactly what is going wrong within the people charged with running the country.

Kohler argues that the failures represent the consequences of neoliberalism and its prevailing ethic of government withdrawal in favour of markets. There’s much that is true in that analysis. If you believe governments shouldn’t do things, the muscle memory of actually doing things and doing them effectively vanishes, and when time comes for government intervention, particularly of any complexity, it involves relearning some very basic skills all over again.

Remember, this is a government that, as the car park rorts scandal shows, can’t even pork-barrel effectively, so it’s unsurprising that it struggles with more substantive policy challenges.

What specifically has gone wrong within the government, and within the public service, that has seen a withering of capacity for effective intervention? Is it readily remediable, or are we stuck with the consequences for some time to come?

Tomorrow: the decline of functional government in the Commonwealth…

Do you think Scott Morrison is the main issue with the federal government, or do the problems run deeper? Let us know your thoughts by writing to [email protected]. Please include your full name if you would like to be considered for publication in Crikey’s Your Say column. We reserve the right to edit for length and clarity.