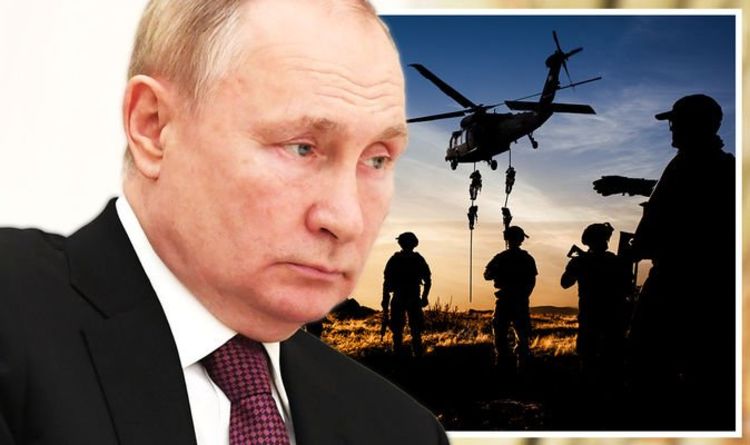 Members of the secretive unit are said to be ready to “extract” UK officials from Ukraine amid an ongoing war of worlds between Moscow and Kiev. Tensions reached boiling point last year after Russia amassed more troops near the contested borders.

Since 2014, more than 14,000 people have been killed in the conflict in eastern Ukraine.

According to reports Moscow’s commanders have ordered large amounts of multi-launch rocket systems to be transported into Belarus which could be used for an invasion.

In September, Ukrainian President Volodymyr Zelenskiy warned an all-out war with Russia could be a “possibility”.

Now, it is believed a special group of SAS soldiers could be placed within Ukraine acting as military advisers.

One security source told the Daily Mirror: “British intelligence is watching developments all over Ukraine but in particular in Crimea, which is occupied by Russian forces.

“All of the other manoeuvres may have been a ruse to deflect from Crimea and Putin may want to expand it towards contested Donbas.”

It is believed Russian President Vladimir Putin is keen to stop Ukraine from becoming a NATO member.

The Kremlin also wants pro-Moscow separatist-occupied Donbas to be officially part of Russia.

“Russia’s military build-up means it can now begin a ground operation or launch a devastating missile and artillery attack at little to no notice.

“Rhetoric from the Kremlin has become more belligerent, including unevidenced accusations that the US is training ‘anti-Russia’ units and Ukraine is preparing to attack separatist forces in Donbas – a tactic the Kremlin used in 2014 to justify its annexation of Crimea.

“We still doubt that Russian forces would attack Kiev, either via ground assault or air and missiles, and assess that Russia’s main goal in any military operation would be to force Ukrainian President Volodymyr Zelensky to resign quickly, and offer wide-ranging concessions from NATO membership to the status of Donbas.”

On Monday, Mr Wallace told MPs: “In light of the increasingly threatening behaviour from Russia and in addition to our current support, the UK is providing a new security assistance package to increase Ukraine’s defensive capabilities.

“We have taken the decision to supply Ukraine with light anti-armour defensive weapons systems.

“A small number of UK personnel will provide early-stage training for a short period of time, within the framework of Operation Orbital, before returning to the United Kingdom.

“This security assistance package complements the training capabilities Ukraine already has and those that are also being provided by the UK and other allies in Europe and the United States.

“Ukraine has every right to defend its borders and this new package of aid further enhances its ability to do so.

“Let me be clear: this support is for short-range and clearly defensive weapon capabilities; they are not strategic weapons and pose no threat to Russia; they are to use in self-defence.”

The Defence Secretary said any invasion by Russia would be viewed as an “occupation”.