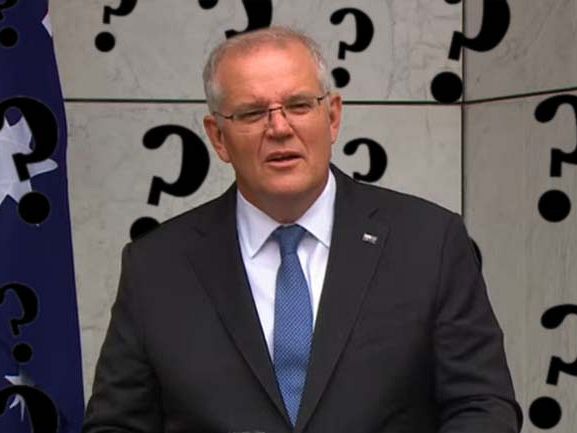 AMONG THE PEOPLE Annika Smethurst interviewed for her book, ‘The Accidental Prime Minister’, were L-NP ministers who worked with Scott Morrison when he was Treasurer in the Turnbull Government. A common refrain is that he saw himself as a minister less answerable on policy ideas to the Cabinet than beholden to newspaper editors, especially editors at The Daily Telegraph and other Murdoch outlets.

Smethurst quotes one long-serving minister in the Cabinet where Morrison had become known by them as ‘the Tabloid Treasurer’:

“All he was doing was going for a headline in the Daily Tele, which was his bible, more so than the Christian Bible. He’d come running into meetings with a mad idea. It would take him a long time to see that his idea didn’t hold water, then he’d blame his staff or a bureaucrat. He never went past the headline.”

The Morrison proposal to lower the age at which workers could be able to drive forklifts fits most people’s idea of a mad idea. While it might leave wiser heads wondering whether he had sourced it from Murdoch editors at The Daily Telegraph or The Herald Sun, it does have initial appeal in a Utopian sort of way. Plenty of 16-year-olds would love the idea of sitting at the wheel of a forklift that can move 50 ton items around a warehouse at speed. This could be their chance to shine.

The electoral appeal of the idea should not be underrated. Australia is in the midst of a supply chain crisis as well as a mental health crisis caused by many children forced into prolonged lockdowns by government failure to supply vaccines. Treasurer Josh Frydenberg has displayed profound empathy for Victorian children caught in that malaise. Therefore, joining the dots seems sensible. Fix one problem by fixing the other. Boost the kids’ self-esteem and keep the supply chain moving.

But we all know it’s a mad idea that has all the hallmarks of not having been run past cabinet colleagues or a depleted public service.

What it has got going for it is that it’s bold and a bit audacious, and that militant union woman Sally McManus is going to hate it. Bold audacious ideas coming from a person in authority get headlines and distract voters from boring matters such as rising daily Omicron cases and hospitalisations, ICU numbers, increasing deaths and empty supermarket shelves. And no RATs.

What it also does is create uncertainty and confusion. But they can be the PM’s best friend when an outbreak of clarity would be the last thing he needs. Confusion bewilders voters and immobilises opponents. And if it has obliging apologists, it can work wonders.

Take AUKUS, for example, which has become a bit of a sleeper.

When Australia’s Prime Minister secretly decided to cancel a contract with the French submarine manufacturer, Naval Group, he offered an explanation to the voters along the lines of having to do it because Australia needs submarines powered by nuclear propulsion for our national interest.

Morrison said we therefore need to join with the United States and the United Kingdom to produce nuclear powered subs — hence his joint AUKUS defence announcement of 16 September with U.S. President Joe Biden and UK Prime Minister Boris Johnson, and his top secret national security meeting with Opposition leader Anthony Albanese on 15 September, to sign him up to the multi-billion-dollar blank-cheque proposal.

The Prime Minister omitted to state that France is a global leader in the manufacture of nuclear propulsion submarines and that the only reason France was not building them for us is because we asked them not to. He instead asked them to redesign their nuclear subs so they would be suitable for conventional propulsion. They had been doing that redesign for the past few years at a $4 billion price tag.

If large parts of an obliging Australian media are a guide, many voters would have accepted the PM’s hogwash, but it was never going to fly with the French President. Morrison knew it wouldn’t and so put off telling him until too late. Thus, what was a confusing announcement to Morrison’s non-Murdoch Australian critics was an outrageous non-sequitur to the French leader.

President Emmanuel Macron was so offended at the insult to his intelligence that he publicly called Morrison a liar, doing so at a global G20 forum as the newly installed head of the European Union, thus ensuring it attracted maximum worldwide attention. It was followed by an apology to Macron by Joe Biden, who said he had been led to believe that Morrison, the “feller down under”, had already spoken to Macron about the AUKUS proposal. That’s Biden’s nice way of revealing that Morrison had also lied to him.

Part of the confusion about the AUKUS announcement involves forgetting that it’s a proposal, not a deal. No one has signed up to it, but that is not what the Prime Minister told the voters. If they believe him, it’s a done deal to fend off our shiny new enemy leading into the 2022 election: China.

The crowning confusion involves timing: we will supposedly get delivery from the U.S. and the UK of eight submarines in 20 years’ time propelled by weapon’s grade uranium. That means we will not have control of where we make them (it can’t be Adelaide), how we mobilise them when they’re made, or how we maintain them as a non-nuclear global actor. For some unexplained reason, we are confident that China will wait for us to become a worthy enemy.

Pondering further on the compromises to our sovereignty, we sort of trust that the current 2024 presidential favourite Donald Trump or one of his children is not president when and if the deal ever becomes a reality. Would an “America First” policy put into effect by a capricious Trump resemble any sort of alignment with Australia’s national interest in 2040?

Children operating forklifts is a small idea. AUKUS is a big massively expensive idea. They are both equally mad ideas. But that’s not what our media tells us about AUKUS. It’s taken Malcolm Turnbull and Paul Keating to point out its absurdity. We are entitled to be confused and that is the intention. When people have been conned, they tend to blame themselves for their bewilderment rather than the conman who sold them the bridge they don’t own.

As the nation moves from a faux election campaign conducted by the Government on the taxpayer dime into the declaration of an election sometime before April, we can assume that obliging journalists will continue to tell us how brilliant the PM is and an assortment of official photographs will be published that establish him firmly in our minds as prime ministerial.

At the same time, there will be other photographs that display him as attentive to his wife and girls when he is not cooking curries or downing beers with the boys at a Sharks football game or taking wickets with Omricon at the cricket.

Paul Begley has worked for many years in public affairs roles, until recently as General Manager of Government and Media Relations with the Australian HR Institute. You can follow Paul on Twitter @yelgeb.