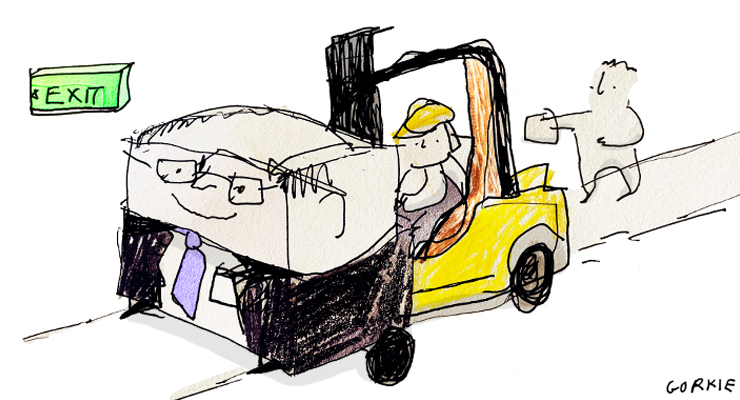 Ridicule is a tough point for any politician to return from, and Scott Morrison is copping plenty as he stands by haplessly and watches Australia’s supply chains fall apart.

With tens of thousands of crucial workers blocked from doing their jobs because of his government’s failure to take advice and secure rapid antigen tests, Morrison’s two workforce ideas this week — doubtless the result of intense brainstorming in the clueless prime minister’s office — involved backpackers and children.

The Coalition loves backpackers. They’re an easily exploited low-skill workforce that can be directed by visa requirements to help politically influential industries like horticulture, where sexual assault and harassment, wage theft and, in many cases, slave-like conditions await them. (The abuse of backpackers is so bad UK Prime Minister Boris Johnson demanded that British backpackers no longer be subject to requirements as the price for a trade agreement.)

“My message to them is: ‘Come on down,’ ” Morrison said on Wednesday, after his bloated non-apology for how shit everything’s been over summer. Backpacker visa fees would be cut and there’d be a Tourism Australia campaign to attract them, he said.

Morrison, of course, knows a thing or two about successful tourism campaigns. Alas, at the same time, in the United States, the Centers for Disease Control and Prevention was telling Americans not to come here. “Avoid travel to Australia,” the CDC now says bluntly. The day before, the European Union had put Australia back on its restricted list as well.

If the poor timing was out of Morrison’s bumbling hands on backpackers, the idea of having kids driving forklifts around the nation’s factories and logistics hubs was 100% pure Morrison, a satire-is-dead moment that made you wonder what potent pharmaceuticals were being consumed in the ministerial wing of Parliament House these days.

Where the bloody hell are the child forklift drivers? Nowhere, sadly. The idea went to national cabinet and was laughed out of the room. “Allowing 16-year-olds to drive a forklift was unanimously rejected by all states and territories,” the ACT’s Chief Minister Andrew Barr said afterwards, in contrast to “sensible and safe measures to alleviate workforce shortages”.

These are the people running the country, and the best they can do to address major supply chain workforce issues they created is the reflexive expansion of reliance on temporary foreign labour, and getting kids to get a forklift licence.

Not all the mockery of Morrison was on workforce issues. One of his backbenchers ridiculed him for his handling of the fetid anti-vaxxer George Christensen. LNP Senator Gerard Rennick opined on Facebook: “George Christensen is actually one of the few politicians in this country that has the guts to stand up to the elites. And what does the prime minister do when pressured by the media about his valid remarks. He caves in like he always does. Pathetic.”

Rennick (and don’t you love it when a national politician earning more than $200K a year reckons he’s not part of the elite) can make these sort of comments because Morrison can’t threaten him with anything. Rennick is a backbench senator whose term doesn’t expire until 2025, like his noxious South Australian anti-vaxxer counterpart Alex Antic. But Morrison also lacks authority. For a prime minister who pulled off a miracle win in 2019, Morrison appears to command surprisingly little personal authority within his own ranks, however much he might repeat “I’m the prime minister” endlessly. He certainly has no authority over Christensen, who remains a member of his backbench with apparent impunity from expulsion no matter what offensive and dangerous things he says.

Meanwhile the polling numbers continue to worsen. The latest Morgan poll carries an even more absurdly extreme swing away from the government, well into landslide territory, with no state offering a safe haven for Coalition seats, not even Queensland.

No one thinks there’ll be a landslide, but with Labor persistently refusing to take the spotlight off the government by announcing any policies, and the polling trend continuing to worsen less than four months until the election, you can understand why backbenchers without a stake in the 2022 poll feel free to mock Morrison.

Question is, will someone step to remove the biggest drag on the Coalition vote before it’s too late?