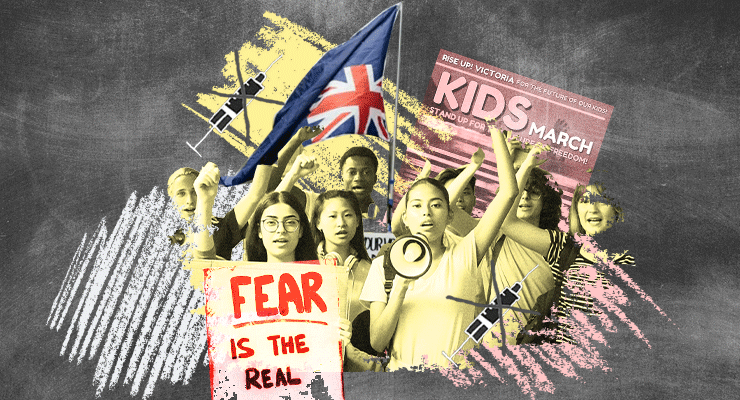 This is part three in a series. For part one, go here, and for part two, go here.

In a secret recording circulated online, an Australian teacher is interrupted while telling a story about someone who died after contracting COVID.

A student asks if she was vaccinated. “She was,” the teacher says.

As a hubbub begins to rise over the room, a student replies: “Exactly, so why are we being told to get the vaccination?”

The teacher begins to respond before stopping to try to control the din of young voices excited by the confrontation.

As anti-vaccine campaigners target the children’s vaccination, new and existing groups are spreading misinformation and trying to pressure local parents, schools and councils in an effort to stymie the rollout. Among the people who are promoting this cause are young Australians themselves.

There’s not much information about vaccine hesitancy among children. Parental hesitancy for children’s COVID-19 vaccine is higher than the general population’s hesitancy. Vaccine hesitancy in adults is highest in younger age groups and decreases with age. A survey of schoolchildren in the UK in the middle of 2021 published in The Lancet found that about one in eight children aged 9-18 would opt out. As at January 20, 22% of 5- to 11-year-olds and 82% of 12- to 15-year-olds in Australia have been given at least one does (rates are affected by myriad factors, including the recency of these age groups’ eligibility for vaccines and their parents’ hesitancy).

Like any other group of the population, there are children and young people who are opposed to vaccinations or vaccine mandates. Alon Refaeli, 11, drew media attention and became anti-vaccine groups’ poster child when he spent more than a month protesting outside his school after his unvaccinated teacher was not allowed to come back to work. Other young people — including children who look as young as five or six — have featured prominently in content produced out of anti-vaccine rallies and protests, sometimes making speeches or holding placards containing medical misinformation.

Social media platforms popular with young people, like TikTok and Instagram, are rife with anti-vaccine content. A report from online misinformation monitoring organisation NewsGuard found last year that children as young as nine were accessing anti-vaccine content on TikTok, despite the platform forbidding users younger than 13 using their services.

Crikey has seen countless examples of young Australians sharing or producing their own anti-vaccine content. (Throughout this article, Crikey has chosen not to identify young users who have not been publicly named.) Users as young as 13 run Instagram accounts sharing everything from anti-vaccine memes to gruesome pictures of alleged vaccine injuries.

Facebook groups with thousands of young members like HSC Discussion 2021 have become battlegrounds over vaccination. In sprawling threads that go for hundreds of comments, members spar as a minority of users question the safety and efficacy of vaccines: “you’re not superior bcs you have a vaccine love x,” one user wrote.

Established anti-vaccine groups have tried to set up youth groups to harness this energy. After a Victorian-based Telegram channel for Reignite Democracy Australia was locked because users were spamming anti-Semitic content, a new group was launched that’s since organised meetups and dinners after attending anti-vaccine protests for members. Another group even tried to organise a “Freedom Formal” for young people who were excluded from their own formals for vaccines.

Meanwhile, young people have set up anti-vaccine groups of their own. Students United Victoria has built an audience on social media platforms like Telegram and Instagram by opposing vaccine mandates. Between anonymous accounts of students facing mandates, petitions and testimonials at protests, the account shares anti-vaccine memes. A recently launched group for young conservatives, The Young Freedom Fighters, features interviews with its young members who claim that vaccines don’t work. These anti-vaccine youth communities remain small for the time being.

But in some cases, young people are fighting back against anti-vaxxers. In August, anti-vaxxers and conspiracy types falsely claimed that the death of Tom Van Dijk was a result of his vaccine. In response to the viral misinformation being shared, a friend of Tom’s posted to a Facebook group with more than 40,000 young members with a call for help.

“As of now there are many insects reporting that he died of Pfizer to promote their political agenda,” he wrote. “Please help us end this slander by reporting these accounts.”

Dozens of other members promised to help and shared their commiserations about the tragedy.

“Doing what I can to stop the anti-vaxxers,” another replied.