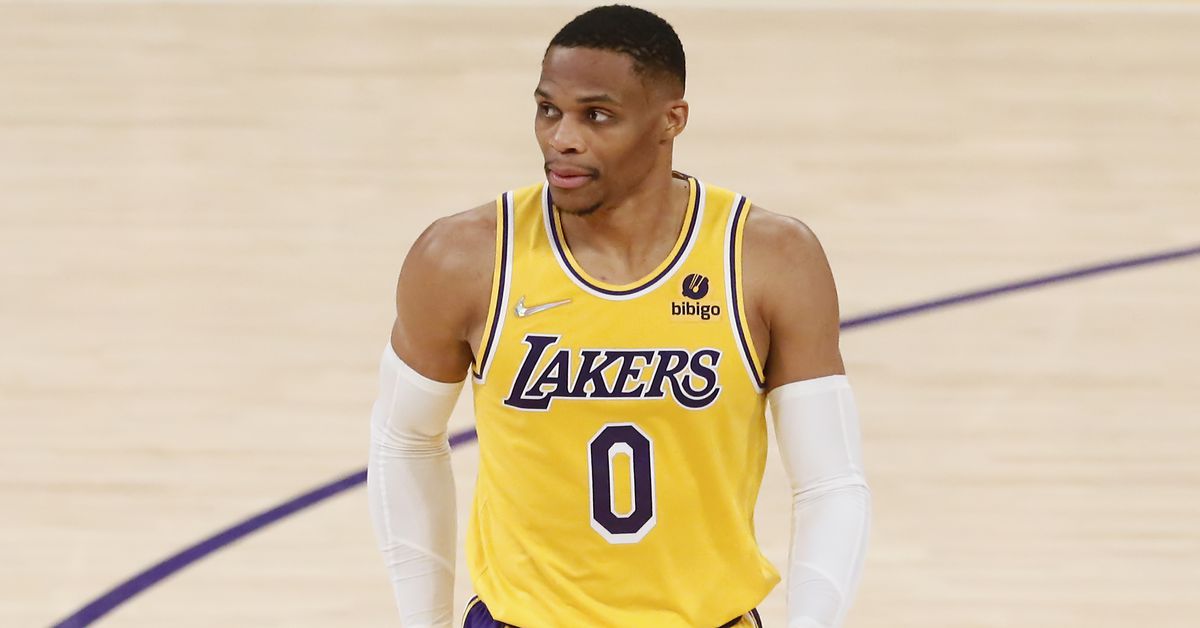 The Los Angeles Lakers entered the season as the betting favorites to win the Western Conference. The only team with better odds to win the 2022 NBA championship was the Brooklyn Nets. Such strong preseason belief required a huge leap of faith given how the previous year ended — LA finished with the No. 7 seed in the West and was eliminated in the first round of the playoffs by the Phoenix Suns — but clearly the memory of the Lakers claiming the 2020 NBA championship inside the bubble was still fresh in people’s minds.

There were two main reasons to believe in the Lakers coming into the season. The biggest was the presence of LeBron James, who had led his team to the NBA Finals in nine of the previous 11 years. The second reason was injuries to many of the Lakers’ conference rivals. The Clippers were likely to be without Kawhi Leonard for the entire season, the Nuggets had the same problem with Jamal Murray, and the Warriors would have to integrate Klay Thompson mid-season after he missed the last two years.

With the season now officially past the halfway point, we can say for sure the Lakers are serious underachievers. LA is currently one game under .500. If the season ended today, the Lakers would be the No. 8 seed in the West and would need to punch their ticket to the playoffs via the play-in tournament.

Two people have received most of the blame for the Lakers’ struggles: head coach Frank Vogel and point guard Russell Westbrook. Vogel’s job is reportedly on the line just two seasons after helping guide the team to a championship. Westbrook was the Lakers’ biggest offseason acquisition, and he was benched down the stretch in LA’s recent loss to the lowly Indiana Pacers.

Westbrook and Vogel are natural scapegoats for the Lakers’ struggles, but they certainly do not deserve all the blame for LA coming up so short of expectations. Here are five reasons the Lakers have underachieved this season that are way deeper than Westbrook and Vogel.

The Lakers’ problems this season can be traced back to last season’s trade deadline. LA was desperately in need of another shot creator as James and Anthony Davis battled injuries, and there was one big name on the market: Kyle Lowry.

The Raptors and Lakers reportedly had the framework of a deal in place. There was only one problem: the Lakers refused to include young guard Talen Horton-Tucker in the deal. From The Athletic:

Multiple sources told The Athletic that the Lakers and Raptors discussed a trade that would have sent both members of Los Angeles’ starting backcourt, Dennis Schröder and Kentavious Caldwell-Pope, and likely some draft compensation to Toronto for Lowry. Throughout Thursday morning, sources said, the sticking point was the inclusion of Talen Horton-Tucker.

Horton-Tucker is certainly a talented young piece, but he was also 20 years old at the time. It was hard to see him on James and Davis’ timeline. Lowry would have given the Lakers a tough defender and capable three-point shooter who could fit around their two best players. The Lakers also could have re-signed Lowry as a free agent, which would have prevented some of their future mistakes.

Alex Caruso was one the Lakers’ great success stories for their 2020 championship run. The Lakers picked up Caruso as an undrafted free agent, groomed him on their G League team, and he eventually became so impactful he was starting games in the NBA Finals. Caruso never scored much, but his ferocious perimeter defense helped make the Lakers elite on that end.

Caruso was a free agent after LA were eliminated in the 2021 playoffs. The Lakers could have kept him, but the cost of re-signing him would have been significantly more than his contract because the Lakers were already so far over the salary cap and into the luxury tax.

The Lakers lowballed Caruso with their initial contract offer of three years, $21 million. When the Chicago Bulls offered just under $40 million over four years, Caruso went to the Lakers and asked them to match. The Lakers refused, citing their luxury tax concerns. Via Silver Screen and Roll:

After building out their roster in the offseason, they took on $44 million in luxury tax, the fifth-highest tax bill in the league. Adding Caruso would have driven that number higher. According to salary cap expert Danny Leroux, if Caruso had agreed to the Lakers offer, the franchise would have owed an additional $17.5 million in luxury tax, a fact the Lakers hoped would resonate with Caruso.

Even though those tax dollars wouldn’t land in his bank account, it did represent a total financial commitment greater than what the Bulls paid and, in the Lakers’ mind, aligned their actual investment with his market value.

The Lakers let Caruso walk, and instead decided to re-sign Horton-Tucker to a three-year contract worth $32 million. He’s mostly been a disappointment so far in his first year of the deal. Of course, they could and should have kept both players (assuming THT wasn’t dealt for Lowry last season).

The Lakers lost a key piece to a championship team for nothing but money. Caruso has since helped turn the Bulls into one of the league’s biggest surprises. He would have been a huge help to the Lakers this season and beyond.

3. The Lakers flubbed their minimum signings

The Lakers were strapped for cap space after trading for Westbrook, and essentially needed to fill out the rest of their roster with minimum or near minimum signings. After using the taxpayer midlevel exception to sign Kendrick Nunn to a deal worth just over $10 million total for two years, the Lakers added the following players: Trevor Ariza, Rajon Rondo, Wayne Ellington, Dwight Howard, Kent Bazemore, Malik Monk, and Carmelo Anthony. Avery Bradley and DeAndre Jordan were also signed.

Nunn hasn’t played a game this year as he recovers from a knee injury. Rondo has been traded. Ariza has barely played as he’s battled injury. Bazemore and Jordan haven’t been effective. Monk, Anthony, and Howard were solid signings, but the Lakers needed to add more real contributors.

Look at what the rival Golden State Warriors did with their minimum contracts, signing Nemanja Bjelica, Otto Porter Jr., and Andre Iguodala to minimum deals. Each have been valuable pieces this year who most importantly fit well around their stars. The Lakers needed to nail these moves on the fringes and they came up short.

4. The Lakers forgot their identity

When the Lakers won the championship inside the bubble, they were a defense-first team. LA finished with the league’s No. 3 defense during the regular season. The defense continued to be dominant in the playoffs on their title run.

The Lakers defense has been straight up bad this season, currently ranking No. 20 in the NBA. There are multiple reasons for why the defense has dropped, but a big one is the Westbrook trade. While Westbrook’s consistently cold shooting gets much of the blame for why his season has gone sideways, his defense has also been poor, which is a trend throughout the recent years of his career. He currently ranks in the 32nd percentile of defensive efficiency according to EPM. While the stat is not a be-all, end-all for evaluating defense, it is a good tool, and in this case it matches the eye test.

The Lakers famously had another trade option they could have went with instead of Westbrook: Kings guard Buddy Hield. While Hield’s outside sharpshooting would have been a great fit with James and Davis on offense, he’s also a pretty brutal defender. EPM has Hield ranked in the 14th percentile defensively.

In making the Westbrook trade, the Lakers also lost impact perimeter defenders with length and skill in Kentavious Caldwell-Pope and Kyle Kuzma. Add the loss of Caruso into the mix, and that’s three important defenders gone. It’s possible that trading a similar package for Hield instead of Westbrook wouldn’t have helped as much as some believe because the defense would likely still struggle.

The biggest individual reason for the Lakers’ downturn this season isn’t Westbrook or Vogel. It’s Anthony Davis’ inability to stay healthy and maintain his status as one of the best players in the world.

When the Lakers won the title inside the bubble, Davis was playing at an incredibly high level. He was dominant defensively and red hot as a perimeter shooter. He was also healthy. None of that has happened this season: Davis has missed significant time with an MCL injury, his shooting fell off, and he wasn’t great enough defensively to save the Lakers after so many key personnel losses on the perimeter.

The shooting numbers from NBA.com are ugly.

Davis was supposed to be the Lakers’ foundational piece who could carry the franchise while James aged out of his prime. Instead, James is 37 years old, and still playing at a near MVP level. Davis hasn’t been able to keep up his end of the bargain to this point. Whatever hope the Lakers have of turning around this season rests on AD playing like a superstar again.

Westbrook’s defense and cold shooting have certainly contributed to the Lakers’ struggles, but the team has not been worse with him on the floor this season. Vogel will probably get fired because there needs to be some consequences for such a poor season, but he’s a good coach who is leading a flawed roster. The Lakers have to look in the mirror to see all the ways this thing really went wrong. With James still playing like a top six or seven player in the world, everyone else around him — starting with ownership and Pelinka — has let him down.