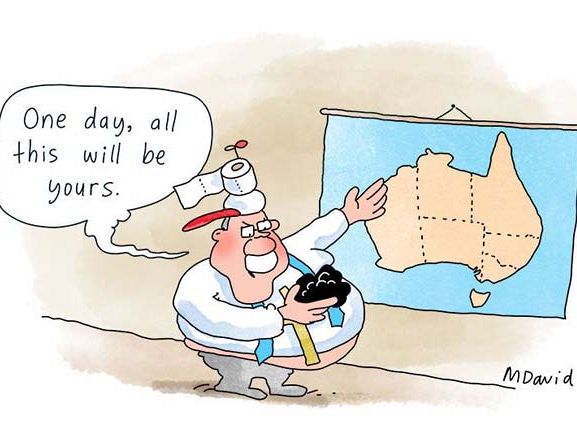 With other nations around the world eliminating coal as an energy source, Australia needs to do more to catch up, writes Dr Gabriel Filippelli.

COAL BARGE after coal barge — ten lining the horizon as I walk along the beach right now in Merewether, Newcastle. Loading up in the port of Newcastle on coal and shipping out of the harbour again.

Load after load, carrying coal to Japan and South Korea to be burned, spewing hundreds of millions of tons of carbon into the atmosphere every year. This sight exemplifies an important economic platform of Australia. But it needs to stop — the planet is already screaming back “no more” in the stark messages of extreme wildfires, droughts, massive flooding and all of the global weirding expected of climate change.

Many countries, such as my own home country of the USA, have seen the equivalent of the coal barges for over a century without being criticised for it. In our case, the coal was mined and burned in-country for electricity — and it still is, accounting for roughly 19 per cent of national electricity production (and falling).

This coal, along with oil to fuel cars, trucks and ships, and increasingly natural gas as a coal replacement, has seriously harmed the environment. Coal in particular impacts local air quality and health through particulate and mercury emissions, and one needn’t look further than the massive Deepwater Horizon offshore platform failure in 2010 to see the catastrophic environmental impacts of fossil fuels.

But it is really the global footprint of burning carbon that is the existential threat to many ecosystems — and us. In this way, Australia does not get off easy. Yes, internal fossil fuel combustion puts Australia as the 12th largest carbon emitter per capita in the world, just ahead of the USA in terms of carbon intensity.

But the coal exports are not added in — when done so, the nation sits in the top three in the world in terms of carbon emissions and dead last in climate action plans. By this metric, Australia exceeds China by a factor of nine, the USA by a factor of four, and India by a factor of 37.

Beyond an ill-fated attempt to “bring coal back” in the States during the equally ill-fated Trump Administration, coal is on its way out in the U.S. Not because we’ve run out of it — we have plenty, but rather the other electricity sources are now economically competitive and have fewer of the worrying environmental impacts that coal has.

Furthermore, the U.S. never really did develop a robust coal export market, preferring to burn most of it right there in the country and thus sustaining coal on exports is a non-starter at this point. Having said that, there are vague glimmers of a minor U.S. coal resurgence and thus the cautious Twain-ism, ‘reports of its death are greatly exaggerated’, might have some merits. Nevertheless, according to all energy market projections, the States are definitely on the waning end of the coal lifecycle.

So, why should the Australian economy suffer just to reduce global carbon emissions, when the U.S. economy benefitted for decades from burning fossil fuels and using our atmosphere as a free exhaust pipe? This is a fair question, but belies the most important issue here — we are rapidly running out of time to gracefully manage the climate crisis. No, the world doesn’t provide strict deadlines to kick our carbon habit, but the more we delay, the more unmanageable, unjust and painful our collective future will be.

It feels like the governments of the world are nodding their collective heads in agreement with the Greta Thunbergs of the world demanding immediate action, saying “you are right, the climate crisis is real and we will get this all sorted by 2050, or 2060” — or some other date conveniently far enough in the future as to not be prone to accountability.

If we wait for market forces to help make our decisions about transitioning off of fossil fuels, we will be so near the climate waterfall that no amount of paddling will allow us to avoid global catastrophe. No, there is no climate deadline, but there is exponentially-increasing pain the longer we hold off on action. And that pain will not be felt uniformly, but rather will be disproportionally born by countries and peoples less able to cope with the ravages of climate change.

So, back to coal barges in Newcastle. Those barges lining the horizon tell the story of disastrous environmental practices to support a national economic policy. But they don’t reflect all the amazing successes that state and local governments and organisations have had in adding renewables to the electricity profile, which now account for over a quarter of Australian energy production — and growing.

This sun-drenched and windswept country has incredible solar and wind potential and if, like in the States, it takes state-level policies to achieve successes when national leadership is lacking, then so be it.

Dr Gabriel Filippelli is a biogeochemist with broad training in climate change, exposure science and environmental health. You can follow Gabriel on Twitter @GabeFilippelli.