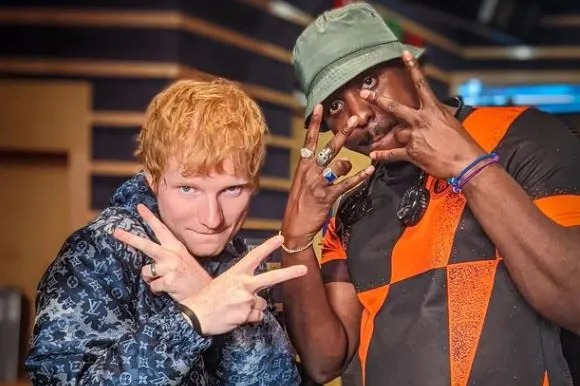 ED Sheeran has broken his silence over Jamal Edwards’ death as the devastated singer called him “my brother”.

The pop star took to social media with a snap of himself with the late star – who died suddenly “from a heart attack” aged 31 last week.

Ed, 31, had been yet to comment on the tragic death – despite Jamal launching the singer’s career with SBTV.

Sharing an old photo of the pair standing side by side, the Shape Of You star wrote that he was “speechless” about the news.

“I haven’t posted anything coz I can’t find the words,” Ed penned in the caption. “I can’t reply coz I don’t know what to say.

“Jamal is my brother, his light shone so bright. He only used it to illuminate others and never asked for anything in return.

“A stars light shines for millions of years after they go, and his will continue to light up every dark moment, we are all witnessing his power.

“I would not be here without him, professionally and personally. There will never be anything close to what he is, but I’m so grateful to have existed within his orbit.”

“My brother, come on,” Ed signed off the emotional post.

Ed and his wife Cherry Seaborn joined hundreds of mourners in West London last night as they paid tribute to Jamal Edwards.

Jamal went out of his way to help Ed when he was starting out in his career – with the Joker and The Queen singer appearing on SBTV.

Keen to pay his respects to the entrepreneur who tragically passed away last weekend from a heart attack aged just 31, Ed and Cherry laid flowers at a mural in Acton, London.

It’s understood that Ed has personally been in contact with Jamal’s mum Brenda Edwards, 52, to offer his support in whatever way he can.

An onlooker said: “Ed and Cherry went to pay their respects on Tuesday night.

“He kept a low profile and no one bothered him. After all Jamal did at the start of his career it was important for him to be there.

“They stayed at the vigil for about 15 minutes before heading to see Brenda.

“He’s told Brenda he will support her in whatever she needs.”

In a statement after the death of her son, Brenda said: “It is with the deepest heartache that I confirm that my beautiful son Jamal Edwards passed away yesterday morning after a sudden illness.

“Myself, his sister Tanish and the rest of his family and friends are completely devastated. He was the centre of our world.

“Jamal was an inspiration to myself and so many. Our love for him lives on, his legacy lives on. Long live Jamal Edwards MBE, MBA, PHD.”