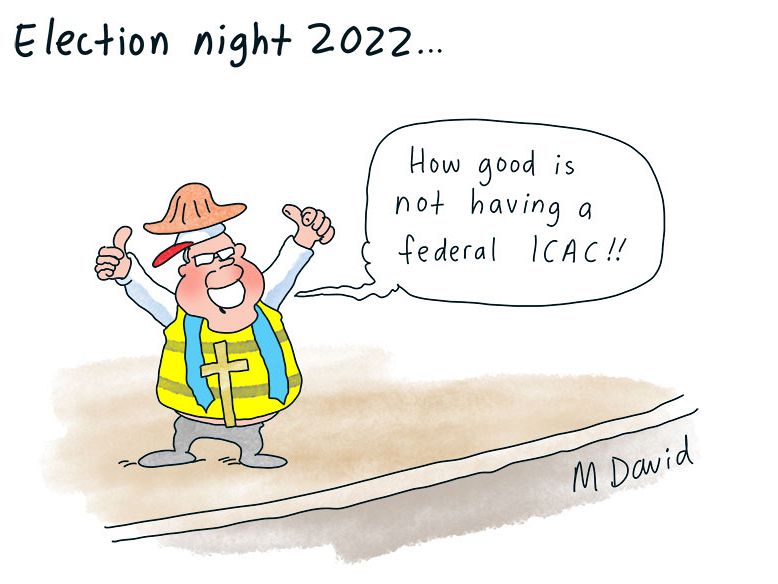 Intelligent independents are the key to real political change. They can go where major parties fear to tread and argue for a fully empowered federal ICAC, writes Dermot Daley.

BROTHERS AND sisters, remember in the dark heart of COVID (when we were all learning to pronounce “epidemiologist”) and when the possibility of an uncontrolled outbreak of a disease we knew so little about loomed over us? Remember how we revered doctors and nurses, cleaners, teachers, and emergency services workers for their steadfast dedication to their roles in our society — while the PM and his cronies dithered and spread blame?

Isn’t it great when people do their jobs properly: when a doctor or nurse in uncomfortable protective overlay administers precise practical aid; when a plumber digs up the leaking sewer and repairs the pipe to remove the stench, and when a mechanic performs a diagnostic on a badly running engine and carries out work to make it perform as expected?

Why is it, that in Australia we allow our politicians to lie and cheat? Why, when they are exposed, do we seem to forgive them without consequences?

Wouldn’t it make sense to expect them to do their jobs properly, as we do firefighters and aged care workers and kindergarten teachers?

Really, since the onset of the thuggery politics of Tony Abbott, can anyone name a single member of the Government front bench who has demonstrated the dignity, intelligence and depth of character that we Australians should expect in our civic leaders?

Barnaby Joyce is an example of much that is wrong with this country. As a sitting member of the National Party and Deputy PM it would be reasonable to assume that he would represent country life and country jobs, now and into the future. However, it appears Mr Joyce got into politics for the personal power and privileges it brings and seems disinclined to live by the standards he proclaims.

Scott Morrison has resolutely declined to define a grown-up vision for Australia during his time in the highest office. His one and only ambition seems to be to live in Kirribilli for as long as he can. The sadly deluded Morrison imagines his cult-like church as a guiding light, yet he still has no clue about morality or ethics.

When he blind-sided Turnbull and Dutton to steal the leadership and impose his gifts of distraction and spin on the public to become Australia’s accidental Prime Minister, he knew that his ambition had outstripped his abilities. This remains the reality.

Josh Frydenberg is always shouting that Labor cannot be trusted with money, however, he has presided over an unprecedented national debt while continuing to allow the Federal Budget to be used as a slush fund for his colleagues. He spends indecent sums to keep innocent refugees in detention while clawing back from aged care and the National Disability Insurance Scheme (NDIS), and all forms of social support infrastructure. Frydenberg brags that anyone working one hour a week is fully employed.

A federal ICAC will require substantial resources to dredge through Mr Frydenberg’s paths of destruction.

Peter Dutton steadily beating the drums of war is, like Frydenberg, eagerly queuing for his turn at living in Kirribilli and with heartless resolve remains a plodding night-watchman who could soon make a demand on the available resources of a federal ICAC.

For some arcane reason, the LNP has deemed itself an entitled class, to be accorded special privileges. Members have forgotten that the role of government ministers is that of senior public servants — with a duty to serve and lead by example.

What about others who see themselves as pillars of the Australian Parliament?

Labor does not have access to the wealthiest magnates nor the media conglomerates who pander to the LNP and is extremely wary of transmitting detailed policy in advance because the masters of spin in the LNP will twist it against the Opposition. Labor has often been wedged by these “experts”.

In his favour, Anthony Albanese has long experience in the parliamentary process and is unlikely to be awed by entrenched bureaucracy (or the swelling breed of over-paid and under-achieving consultants). He could be the steady hand needed to restore the trust in government long ravaged by LNP abusers. A key strength of the ALP is the depth of experience of capable women, many of whom have declared that they have no interest in contesting the leadership.

It is increasingly difficult to rate the Greens. Most members are believers in noble causes, but, in the political arena, they seem incomplete and bewildered. Many people cannot forgive the Greens for failing to support Labor’s carbon pollution reduction scheme, paving a path for Abbott-the-wrecker to send the country 40 years back in time.

Pauline Hanson’s One Nation appears mostly just a group of nutters who have found a means to sustain their brand of racism. One-trick-pony’s such as Shooters, Fishers and Farmers or Animal Justice Party are entitled to their voices. The less said about Clive Palmer the better.

Intelligent independents are the key to real change. They can go where the major parties fear to tread. They can argue for a fully empowered federal ICAC. They can push for genuine tax reform. They can vote with conscience without having to conform to contentious party policy and they will not corral us into the tragedy of another war.

We need more true independents in our Parliament. I believe A Labor government with a strong independent cross-bench would be an ideal blend to bring Australia into the 21st Century as a proper democratic nation with sensible foreign policy in the Pacific region — a notion which seems to have never crossed the collective mind of the LNP.

A federal election is looming. One must vote wisely and vote for candidates who are not self-serving sociopaths to make Australia an adult nation again.

Dermot Daley is a fourth-generation Australian living in Victoria, who is now retired from construction project management​​​​​​.