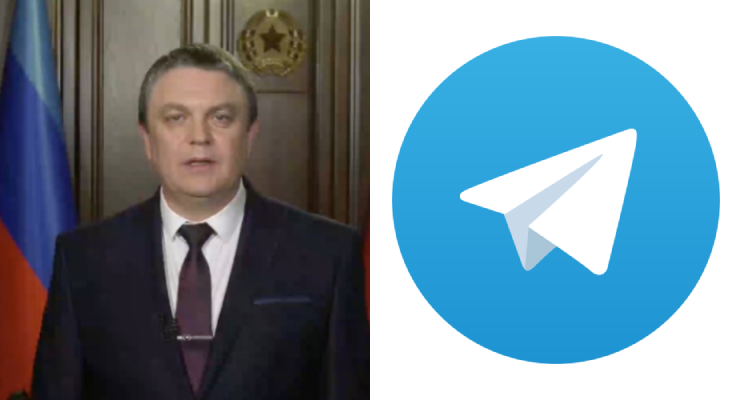 In a video released by a leader of a pro-Russia separatist group last week, Lugansk People’s Republic (LPR) de facto head Denis Pushilin ordered an evacuation. Ukraine’s military was about to invade, he claimed, and residents needed to leave that day, ”February 18”.

This video was sent on Telegram, a popular tech platform. It was also Telegram’s peculiarities as a service that allowed observers to prove that the video was staged.

Metadata in the video — which is stripped when a user uploads content to most major platforms like Facebook and Twitter but not Telegram — revealed that the video was actually filmed two days before, February 16. This announcement wasn’t an emergency response to a current event but a carefully scripted misinformation effort to lay the groundwork for a Russian incursion.

Telegram is an unusual tech platform. Founded by two Russian brothers, Nikolai and Pavel Durov, and based out of Dubai, the app mixes features of social networks like Facebook and messaging services like WhatsApp. Users can individually message, call or video people or create groups with up to 200,000 users.

Despite having just 30 staff, it claims the app has been downloaded more than a billion times and has 500 million monthly active users. It’s free and doesn’t have a clear business model; it’s bankrolled by the Durov brothers who previously founded and sold VK, a popular Russian social network.

Telegram has also become the de facto social network of misinformation, conspiracy theories and extremism. It’s extremely lightly moderated, only removing content that threatens violence (and even then, these threats often remain online according to experts cited in WIRED’s deep dive into Telegram), providing an oasis from people who’ve been chased off other apps. It’s easy to use, and compared with other social networks that market themselves as “free speech” alternatives to majors, it works and works well.

Australian conspiracy theorists and extremists have embraced the platform as the connective tissue of their movement. They’ve used it to organise protests like the Convoy to Canberra and to fundraise even when they’ve been banned from other platforms. The same goes for their international counterparts — Germany is even considering banning it.

Despite the media attention, Telegram users are not limited to just those on fringes. It’s popular in countries like Russia and has emerged as an important form of communication for those involved with and observing the crisis on Ukraine’s borders.

Official statements from ministers and government orders are being shared. The major media companies (including Russian state media) are all on the platform too. Groups are using it to organise housing and clothes for evacuees.

Naturally it’s also become one of the major battlegrounds for the Russia-Ukraine information war too. Pro-Russian channels have been documented sharing rumours or fake content to win support. Videos of shelling and gunfire — with no proof of Ukraine’s involvement — are being spread widely to make the case for retaliation.

Questions remain over the influence of the Kremlin on the platform. Despite often being referred to as “encrypted”, most of its communications are not encrypted and are stored on Telegram’s servers — meaning it’s possible a third party could access them.

While in the past the Russian government has tried to block the platform (accidentally knocking out much of the Russian internet but not, ironically, Telegram), it now has become a major medium of influence. That the platform has also been used to sow discord by facilitating extremism and conspiracy across much of the West hasn’t gone unnoticed either.

And there is some evidence that it has cooperated in the past. Despite Pavel Durov’s previous outspoken opposition to Russian President Vladimir Putin, a draft letter between Durov and a Putin staff member published by a Russian newspaper allegedly showed the Telegram founder providing information about users to the Kremlin. Durov denied the letter but acknowledged the staff member had visited his office several times.

Despite largely receiving media attention in the West for its links to the extreme, Telegram is playing an important role in the unfolding conflict between Russia and Ukraine.