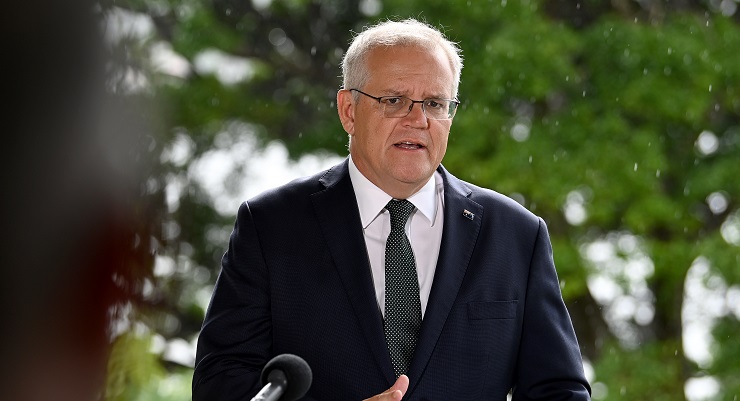 Scott Morrison said Australia’s actions were largely symbolic, and would likely do little to prevent further aggression from Russia.

Australia’s first tranche of sanctions against Russia won’t take effect until the end of March in order to give businesses a chance to adjust, Prime Minister Scott Morrison revealed this morning.

“This is important under legislation because that gives the opportunities for businesses that have had legitimate operations and business interests in Russia and in the affected territories of Ukraine to be able to make changes to their arrangements,” the PM told reporters.

The sanctions were first announced by Morrison yesterday following a meeting with the National Security Committee of Cabinet and will become law tomorrow. They follow Moscow’s heightened aggression towards Ukraine, and will target eight individual members of Russia’s security council and a series of financial institutions — Russian State Development Bank, VEB, the military bank Promsvyazbank, Rossiya, IS Bank, the General Bank and the Black Sea Bank. The government will also extend sanctions in place for the regions of Crimea and Sevastopol to Donetsk and Luhansk, which Russian President Vladimir Putin this week recognised as independent. These will target industries like oil, gas, telecommunications and mineral reserves.