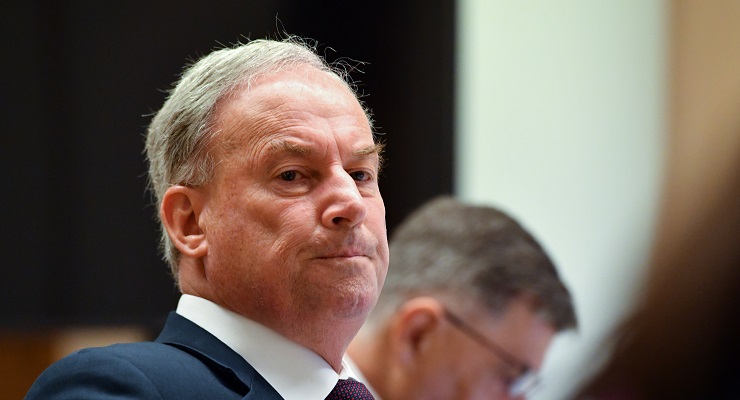 Is there a worse, less competent, more contemptible minister anywhere in the country than the man notionally in charge of aged care, Richard Colbeck?

Yesterday Colbeck had the effrontery to issue a media release — strangely yet to adorn his media site — titled “Aged care sector deserves more than criticism”, which claimed “the Morrison government is delivering the largest reform package of its kind in history — while Labor does nothing”.

Labor, presumably, should have mounted a coup, ousted the government and replaced Colbeck with Clare O’Neil rather than supinely serving in opposition where opportunities to control policy and funding are — who knew? — few and far between.

Whatever substance — a term used in the laziest possible sense — was to be found in Colbeck’s media release, one presumably ploddingly pecked out by the minister and his useless minions on an old typewriter over a nice Tassie chardy from a corporate box at Bellerive Oval, lay in his complaint that “at a time when we should be working to attract new people to aged care and grow the sector. Labor keeps telling Australians that aged care worker conditions are bad, that the jobs are not worthwhile”.

As Colbeck would know if he took even a fleeting interest in the position he swore to the governor-general he’d serve in “well and truly”, no one needs Labor to tell Australians that aged care worker conditions are bad. Aged care workers will tell us quick smart if we ask.

Indeed they’ve been telling us with their feet as they abandon the sector in droves for better-paid, lower-stress jobs. If Colbeck doesn’t believe workers or aged care unions that have called for pay rises for decades, he could ask the aged care providers whose interests the Coalition places above the needs of aged care residents and workers. They too will tell him they urgently need significant pay rises to retain staff.

Or he could read the aged care royal commission report — a document he claims to be implementing but doesn’t seem to have opened — which spells out why poor pay, lack of training and lack of a professional career structure make aged care such an uninviting place to work. And what to do about it — though for all the government’s actions, that bit evidently remains sealed in a high-security undisclosed location.

Labor won’t formally commit to funding whatever the Fair Work Commission decides is appropriate remuneration for aged care workers, Colbeck claims — and entirely correctly — without noting that he won’t either. But he would argue the toss on that: “The Morrison government is supporting the Fair Work Commission by providing information and data as requested.”

Except that’s simply bullshit. Aged care unions have requested what the federal government’s position is on funding an aged care workforce pay rise in the current case. The FWC forwarded that request to the Commonwealth’s solicitors in the case seeking a response. The response was: “It’s a matter for the commission.”

But Colbeck’s gall transforms — like alchemy undertaken in a particularly foul sewer — into something far more offensive when he likens himself to aged care workers. After praising the (remaining) aged care workers “at every level across the sector who have stood tall to prioritise the needs of those in care”, Colbeck goes on to claim:

Despite the endless criticism from Labor, the government has also stepped up.

Whoever wrote that offensive garbage should be consigned to work in one of Australia’s many rotten, underresourced, understaffed, undernourished nursing homes for the rest of their days, eating only the diet the unfortunate residents have to endure. (Though, hey, it’s not so bad, according to Scott Morrison and Greg Hunt — most of them are in the process of dying anyway, so who cares?)

This is the result of the government “stepping up”:

The only way Colbeck has “well and truly served” in the aged care portfolio is to preside over the sector being well and truly fucked. How he doesn’t feel any sense of shame — or, more appropriately, profound self-loathing — is a mystery for the ages. That he took time out from busy schedule of doing zip on aged care to belt Labor is further evidence that this appalling minister is complicit in one of the great national tragedies of recent years.

Why is Colbeck still holding his $332,700 a year job? Let us know your thoughts by writing to [email protected]. Please include your full name to be considered for publication. We reserve the right to edit for length and clarity.