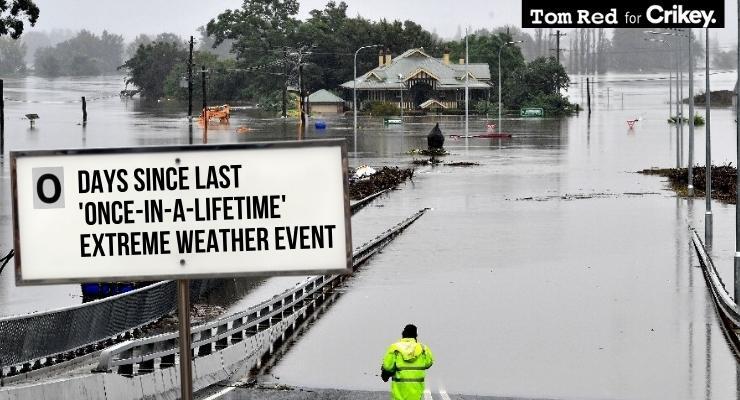 This week, as Australia was battered by catastrophic floods, the Intergovernmental Panel on Climate Change (IPCC) released another report warning that the country is woefully under-prepared for a global heating crisis that will impact us more severely than any other advanced economy.

These two things are overtly linked: the report made clear that flash flooding, the likes of which have left Lismore under 14 metres of water this week, is set to increase. Meanwhile, on the current warming trajectory, Australia’s GDP growth would be hammered, hundreds of people would die of heat stroke every year and ecosystems like coral reefs would wither away.

But in a week where Australia lived through the kind of future bodies like the IPCC have been warning us about for decades, the political response to the report was strangely muted. Everybody wanted to talk about the floods. Climate remained the elephant in the room, as it so often is during the natural disasters that seem to hit Australia with even greater frequency.

The lacklustre response to the report was most obvious from the government. When the IPCC released the first part of its Sixth Assessment Report in August last year, Prime Minister Scott Morrison held a press conference alongside Energy and Emissions Reduction Minister Angus Taylor to address the “very serious matter” of the IPCC’s latest findings.

This week’s report was the sequel — focusing on adaptation, impacts and vulnerability, or an illustration of how the current flood crisis will become a new normal.

Morrison currently has COVID, and his public statements have so far focused on the flood response and the crisis in Ukraine. But at his presser on Tuesday, hours after the IPCC report was released, it didn’t get a mention. The only acknowledgement from Morrison was a brief line from a spokesman for the PM telling AAP that Australia had reduced emissions faster than many comparable countries. Taylor has put out six media releases since the report dropped on Monday night without mentioning it.

Environment Minister Sussan Ley is yet to comment publicly on the report. Emergency Services Minister Bridget McKenzie was asked about the report on ABC News Breakfast and said the IPCC was “dead right”, before attacking big emitters for their failure to plan for net zero. Which is funny because McKenzie, along with her colleagues in the Nationals party room, spent months holding the government to ransom over a net zero commitment.

Although Labor’s response to the floods has been to point out where the government was inadequately prepared, the opposition did at least acknowledge the report’s existence. Opposition climate and energy spokesperson Chris Bowen actually drew the link between the report and the current flooding crisis.

“Today is yet another stark warning. But it’s a stark warning which is particularly relevant to Australian,” he said on Tuesday.

Still, Labor notably didn’t use the report as an opportunity to kick the government particularly hard on climate — save a few tweets from Bowen.

The Australia Institute’s climate and energy program director Richie Merzian said the political response to the report was muted, despite the current crisis clearly reflecting the authors’ warnings.

“The report is timed with, ironically, a massive, extreme weather event that is linked to climate change. It’s crystal clear we’re going to get more floods,” he said.

In pure political terms, the response from both parties makes sense. When the last report was released, Morrison was still trying to lay the groundwork to sell his emissions reduction “plan” both to the electorate and recalcitrant Nationals. Now, any mention of climate reminds voters of another source of deep division within the Coalition ranks, and a net zero package even big business thought was inadequate.

For Labor, going too hard on climate risks being hit with the kind of scare campaign that saw them blown away in Queensland at the last election. The opposition hopes its “goldilocks” plan to lower emissions 43% by 2030 is enough to appear both ambitious and non-threatening, while giving it room to avoid the dreaded climate wedge.

All this means is that the major parties are reluctant to join the dots between the current crisis and the bigger climate emergency. For Merzian, politicians’ reluctance to go near climate during an emergency is a sign of how polarised and antagonistic the debate has become.

“Climate change has been so politicised in Australia that there isn’t even the breathing space to have the discussion,” he said.

“We’ve made climate a taboo alongside religion and politics.”